Apfelpfannkuchen, or German Apple Pancakes, are a light and eggy breakfast treat, full of slices of sweet, caramelized apples. 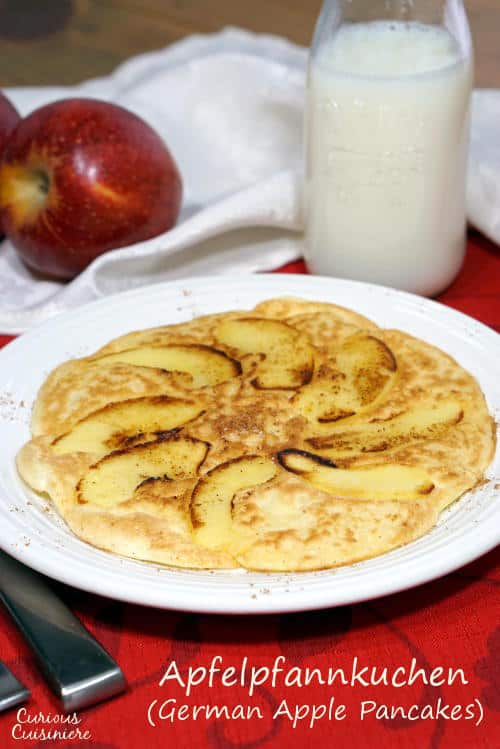 In the States, when we think of a German Pancake we think of another brunch and breakfast dish: the Dutch Baby. The thin batter for these breakfast cakes is poured into a skillet and then baked in the oven. As they bake they puff up like a souffle. We can see the German roots in the American Dutch Baby in the makeup of the batter and the full pan size of traditional German pancakes, called pfannkuchen (pronounced pfahn-KOO-khen).

Apfel (pronounced as it is spelled AP-fel) is the German word for apple, and tacking it onto the front of pfannkuchen get us delicious apple pancakes.

You can find many different recipes for Apfelpfannkuchen. Some use leavening, others don’t. Some are baked in the oven, others are cooked on the stove top. What they all have in common is a very eggy batter and a pancake that fills the cooking vessel.

The most-used technique we found for the pancake batter surprised us so much we knew we had to make our Apfelpfannkuchen that way. It involved folding stiffly beaten egg whites into a VERY thin batter. The beaten egg whites thicken the batter and create a very unique texture and leavening effect.

The beaten egg white batter resulted in an incredibly light pancake with a texture that reminded us of French crepes, but a thickness like a standard American pancake.

The batter doesn’t call for any oil (except for what you use to fry your pancakes), but don’t worry. The egg stands in for the fat, giving the end pancakes the richness and texture you would typically get from oil or butter.

We typically make Dutch Babies in a 12 inch cast iron skillet, but when we realized that we would actually need to flip the Apfelpfannkuchen, since we were cooking them stove-top, we decided to shrink our pan size a bit. By using an 8 inch skillet, the Apfelpfannkuchen are much easier to flip and the apple slices arranged very nicely in a single spiral around the pan. (If you have the desire to attempt to flip a 12 inch Apfelpfannkuchen, don’t let us stop you. It would be a fun morning challenge, that’s for sure!) 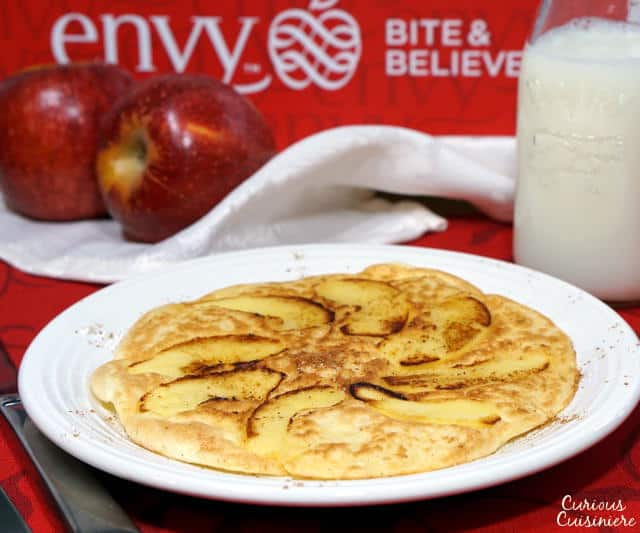 The other thing that would seem to be missing from Apfelpfannkuchen batter is the sugar. These pancakes are traditionally not sweetened, or not sweetened very much at all. While this sounds strange to those of us used to super sweet pancakes for breakfast (that we then cover with more sweetness), these pancakes get all of their sweetness from the lightly caramelized apples inside and from the cinnamon sugar topping.

That is why it is incredibly important to use a sweet and crisp apple for your Apfelpfannkuchen. If you use a tart apple, your pancakes will end up tart. And no one wants to bit into a tart pancake for breakfast.

The apples we used for our pancakes were Envy Apples a cross between Braeburn and Royal Gala that originated in New Zealand and can now be found growing in Chile and in the US in Washington State as well.

The apples are nice and crisp and super sweet. They are wonderful for eating straight, but we loved the burst of juicy sweet flavor that they gave the Apfelpfannkuchen. 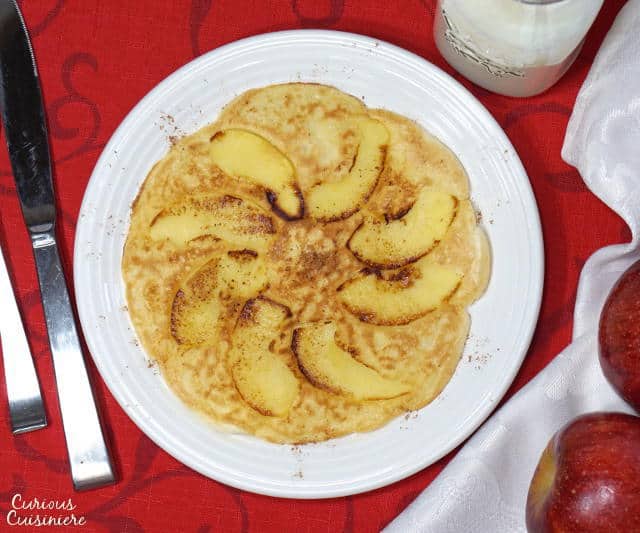 Nearly every culture loves pancakes in one form or another. Here are some other large and small pancake recipes from around the world to try. 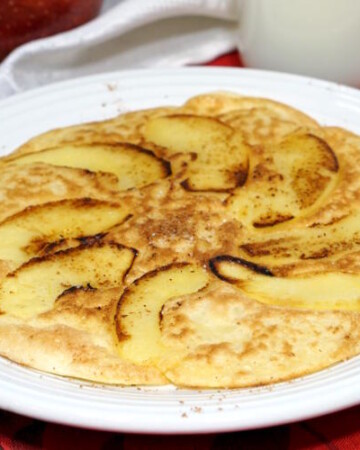 DISCLOSURE: We received samples of Envy Apples that we used in this recipe. We were not compensated for our time. As always, all opinions are our own. 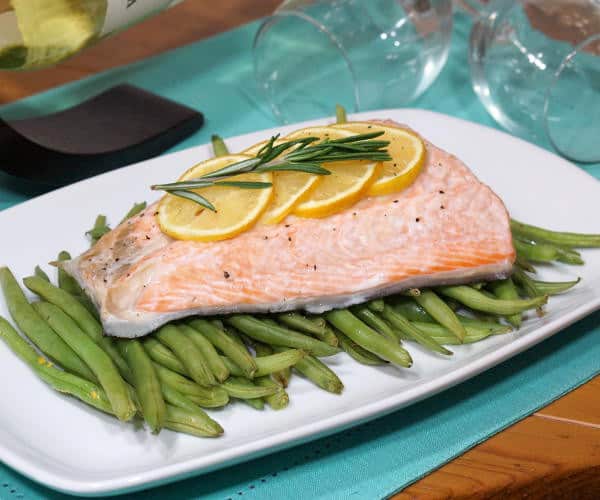 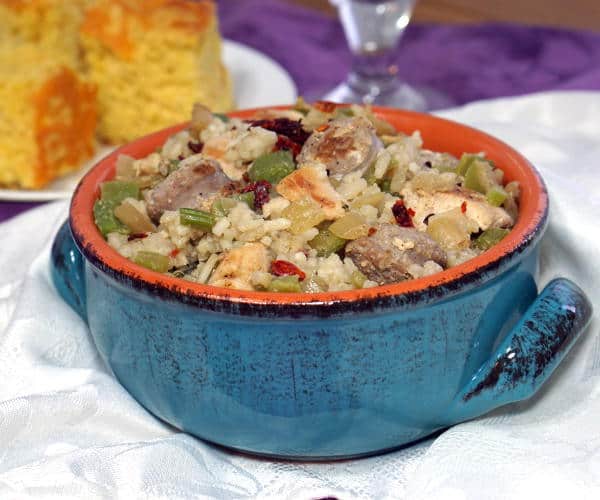 I learned to flip the pancake by putting a similar sized plate onto the pan, then you hold and flip them together (one hand on the plate, one on the pan handle). You can then let the pancake slide off the plate into the pan again to cook it on the other side. Use the same technique to take the finished pancake out to put it onto your staple. I think apple pancakes are always too heavy to flip them with a spatula or by by throwing them into the air.

Thank you so much for sharing your tip Amelie!

I could not stop smiling in between bites! Thank you.

So glad you enjoyed it Teena!

First, the flavor is good. The recipe heat level and process to flip, however seems off. The apples burn easily, and it breaks every time it flips. It doesnt hold any form, so every pancake won't be intact. I've tried higher and lower heat levels. The only way for it stay intact is if you are making silver dollar sized pancakes which would probably work best. Other than that, they taste fine.

Thanks for your comments Gwendolynne. I wonder if your apples were slices a bit thick. This would definitely make it harder to flip and may cause the apples to burn before the cake is done. Also, what size pan were you using? We find that using a 6 or 8 inch skillet with a good nonstick coating works best to flip these. If you still have trouble flipping them, you could add a bit of extra flour to the batter, to thicken it a bit. That would help them to be a bit more sturdy for flipping.

Looks amazing! And cooked in cast iron makes it that much better.

Anything cooked in cast iron is so much better! :)