Clotted Cream is deliciously creamy and the essential companion to a batch of British scones. You don’t have to go to England to enjoy your tea-time treats though, because clotted cream is so easy to make at home! 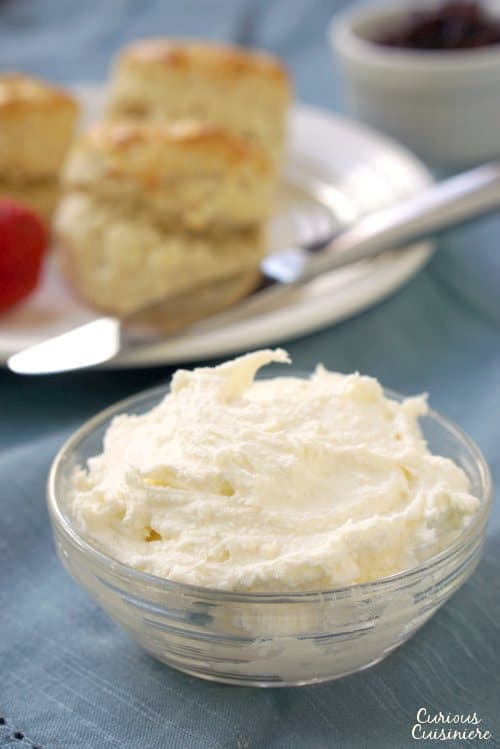 What Is Clotted Cream?

Clotted cream is a staple on British tea-time tables. You’ll find it served in a little dish right along side of your scones.

It is a thick, creamy, white spread, the consistency of softened cream cheese. It is ever so slightly sweet, but mostly just incredibly creamy. Like a good, unsalted butter.

But so much more.

Sometimes you may hear “clotted cream” called “Devonshire cream” or “Cornish cream”. It really all depends on region you are in.

The making of clotted cream started in Devon as a way to separate the fat from milk to make butter. Centuries later in Cornwall, it became popular to use the cream on its own. At that time, clotted cream and butter were the most popular ways to preserve milk.

Of course, those in Devon and Cornwall each claim that their cream is superior.

We’ll have to take a trip to decide for ourselves! 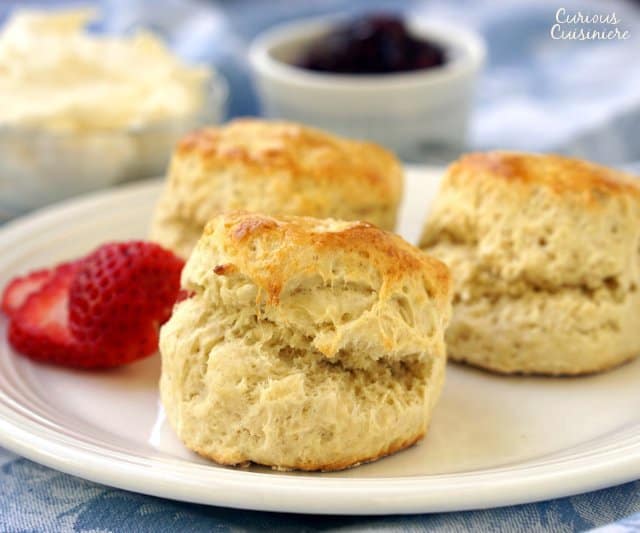 Clotted cream is the perfect accompaniment to our British scones!

What’s The Difference Between Clotted Cream And Whipped Cream?

While at first a bowl of clotted cream might look similar to whipped cream, once you take a taste, you’ll know the difference.

Both start with the same basic ingredient: heavy cream. But, for whipped cream you whip that cream into light and fluffy pillows. Often you’ll add sweetener and possibly a flavoring, like vanilla, to whipped cream as well.

Clotted cream, on the other hand, is heated and separated, as we’ll go into more detail on below. This process produces a thicker, creamy substance.

Another difference is that clotted cream is typically not sweetened. It’s loved for the creamy texture it adds, similar to butter, rather than a particular sweetness or flavor.

What’s The Difference Between Clotted Cream And Butter?

So, if it has a thicker consistency and is more savory, how is clotted cream different from butter?

Again, it comes down to the process.

Butter is made by churning (or whipping) cream. So, if you over whip your whipped cream, you’ll end up with a nice, whipped butter.

Clotted cream, again, has to do with the separation of the fat in your cream. So let’s get into the process of how to make clotted cream. 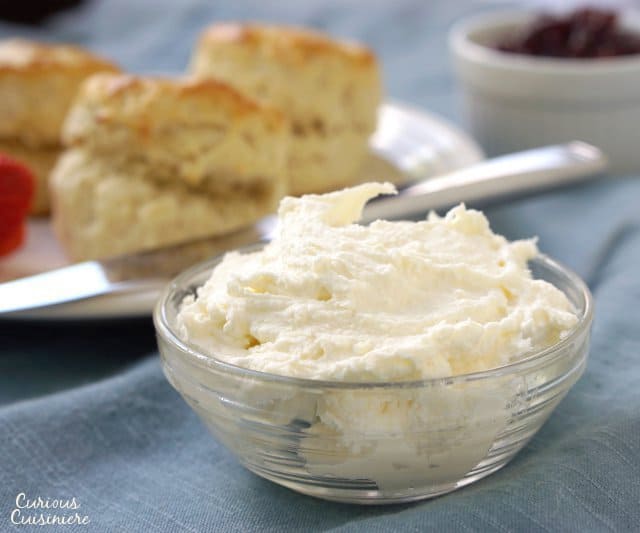 How To Make Clotted Cream

Clotted describes the look of the cream when it is heated ever so gently so that the fat separates to the top and clings together.

Buying jars of imported clotted cream can get quite pricey. But  you don’t have to worry about that any more, because making it at home is incredibly easy.

After you find your cream, the second hardest part to making clotted cream is the wait.

It is not a quick process.

The cream has to be heated slowly for 12 hours, which we find easiest to do overnight. Then it is cooled for another 8 hours (or over the next night).

Finally, you separate the cream from the liquid, and you have the spread that you have been waiting for.

It might take a long time, but it’s mostly hands off.

And it’s SO worth the wait! 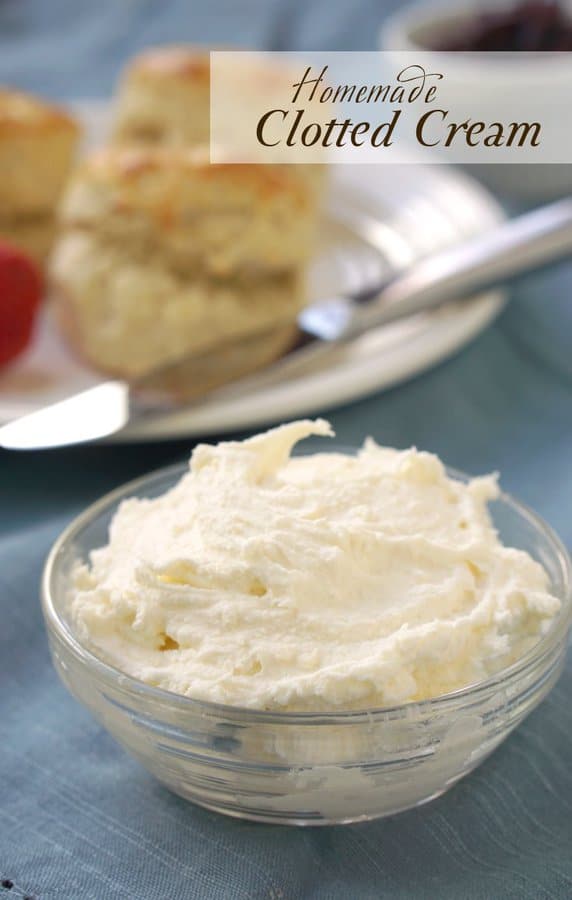 Clotted cream typically lends itself to sweet uses: spread on scones with some jam (or other bread products), used in fudge, as a topping to tarts or ice cream. However, it is rich and creamy and could be used for savory applications as well.

We think it would be delicious as a veggie dip or spread on a cucumber slice as an appetizer. You could also add it to soups or sauces to give them a creamy boost. It can also be added to mashed potatoes, risotto, or eggs to give them extra creaminess, much like you would butter.

Can I Make Clotted Cream In The Slow Cooker?

This is a question that we get often from our readers, so we did some testing to find out.

The answer is yes you can! Have a look at our recipe and process for making clotted cream in the slow cooker.

There are also some nice tips and tricks about making clotted cream in general over there, so even if you’re thinking about making it using this oven method, take a look over there for the tips! 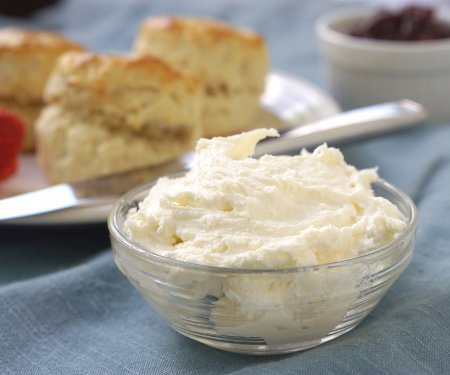 To make clotted cream, you will want to start the process 3 days before you plan to serve your cream. It sounds like a lot of time, but most of the process is done while you sleep!Yield: 1 cup
Cook Time12 hrs
Resting Time12 hrs
Total Time1 d
Course: Condiment
Cuisine: British
Servings: 16 people
Author: Sarah | Curious Cuisiniere

*The leftover liquid can be used like milk. It’s great for baking! ** Oven note #1: Some ovens have a safety feature that shuts them off after extended periods of time. If this is your oven, you may want to do the clotting step during the day, when you can make sure your oven stays on and at a low temperature.  Oven note #2: We have a lot of readers who are discovering as they try this recipe that their oven runs hot. After 12 hours in the oven, their cream has developed a dark brown skin. The skin on your cream should only be a pale tan if it starts to darken. If you think your oven may run hot, check your cream after 8 hours and again after 10 hours to see if the top is darkening. If it is, you may need to cycle your oven between off and on to keep a temperature that is not too hot for the cream. (As a side note, the darkened top on the cream does not mean it is ruined. It simply means your finished cream will have a bit of a deeper flavor, and it will most likely have some flecks of brown and not be a pure creamy white.) 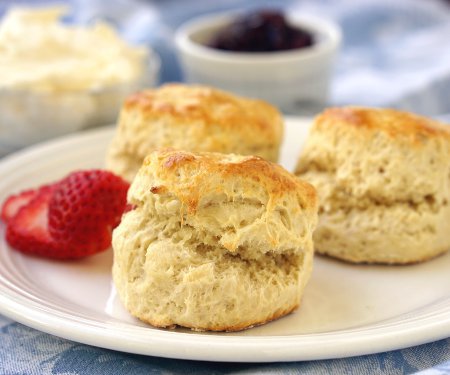 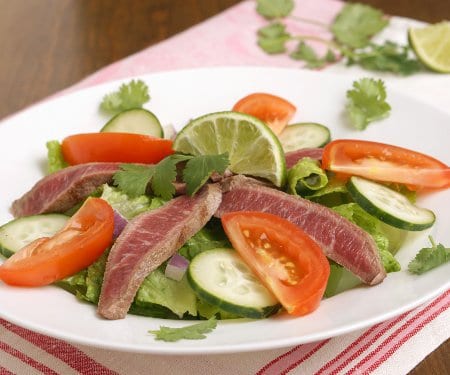 Why did u bake it in a pan?

We use a baking dish with at least 3 inch sides.

Clotted cream isn't all that easy to come by here in Switzerland, where I live. I'm sooooo happy I found your recipe. :-) I tried making it for the first time last week and loved it. Now I'm in the process of making some to surprise my husband for his birthday on Sunday.

So glad you enjoyed it! What a fun birthday surprise!

No, you must not stir the finished cream. Clotted cream has a yellowish layer of butter-like fat on the surface. Part of the exquisite pleasure is to break through this layer to reach the smooth cream below. It has a distinctive taste and texture, and should be enjoyed for it's own sake.

Thank you for sharing!

Excellent! I baked about 3/4 of a quart of cream in a pan where the depth of the liquid was about an inch. Put on the oven at 7pm and it went off at 3am..about 8 hours. It was room temp at 7am when I checked. Put it in the fridge for about 10 hours and it was perfect! Used the liquid milk to make pancakes the next morning. :)

Oh my goodness! This is brilliant. I just skimmed off the cream a few minutes ago after baking yesterday and putting in fridge overnight. This is fabulous😁. Had I bought the amount that I made it would have cost over $50!!! The heavy cream cost me $5.79 at my local supermarket and I did use the whole carton, but what a lovely treat it will be and what a great gift for my friends too😁

So glad you're enjoying it Victoria!