Beijing Roast Duck, also known as Peking Duck is a delicious way to prepare roast duck. It is traditionally served as Peking Duck pancakes, wrapped in Mandarin pancakes along with cucumber and plum or hoisin sauce.

Our recipe is easier than many traditional methods, but still yields a delicious duck, full of the classic flavors.

We’re pairing our Peking Duck with Merlot wine for this month’s celebration of #MerlotMe. 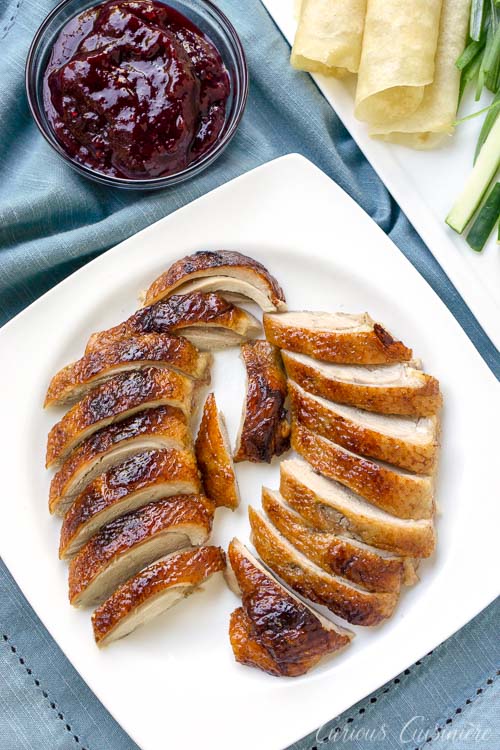 When in Beijing, it’s not a turkey or goose that you find, it’s duck.

And, it’s not just any duck.

Beijing roast duck, also known as Peking Duck or Chinese roast duck, rose to the spotlight over 700 years ago in the royal palace in China.

Traditional Beijing roast duck is quite the process which makes it worthy to be considered the food of royalty.

If this process sounds intimidating, read on. We’ve simplified it so that it’s much more manageable in the home kitchen. 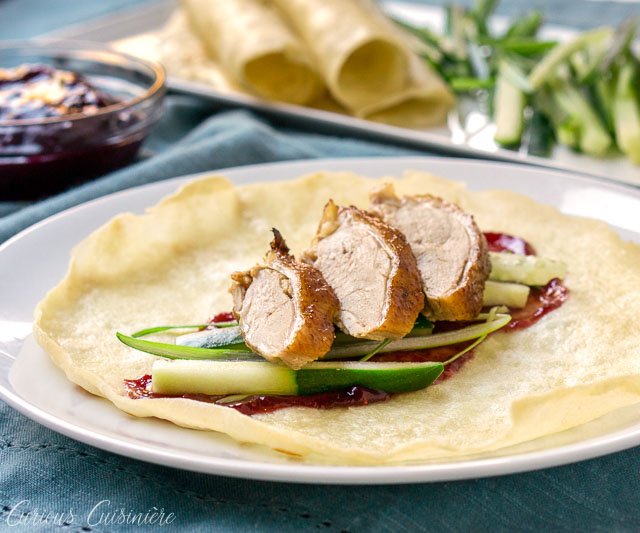 How To Choose A Duck To Roast For Peking Duck

Traditionally the Pekin breed of duck is the best choice for this dish.

Pekin duck meat is tender and it has less fat in the skin, meaning that it will crisp up quite nicely.

That’s good news, because White Pekin duck is the most popular breed of duck raised in the US. It was brought from China to Long Island, so it is sometimes referred to as Long Island Duck.

If you’re in the States and your duck doesn’t say what kind it is, there’s a good bet that it’s Pekin. 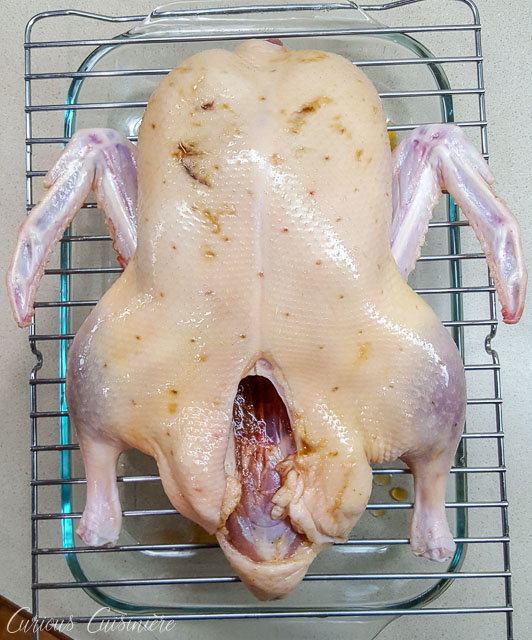 Our Pekin duck after air drying in the refrigerator for 18 hours. The skin is visibly dry and taught.

One of the draws of Peking duck is the crispy duck skin.

As you’re working with the duck, you’ll probably notice that the skin is a bit thicker and fattier than chicken skin. So, most of the prep work for roasting Peking duck is for the purpose of getting the skin to render out as much of the fat as it can, so that it will crisp up nicely.

We do this in a couple of ways.

First, we separate the skin from the meat.

Traditionally, air is pumped between the skin and meat to separate it. But, we separate the skin from the meat whenever we make turkey as well, so doing it by hand really isn’t that big of a deal.

Starting at the cavity, slide your hand between the breast meat and the skin, breaking any of the connections. 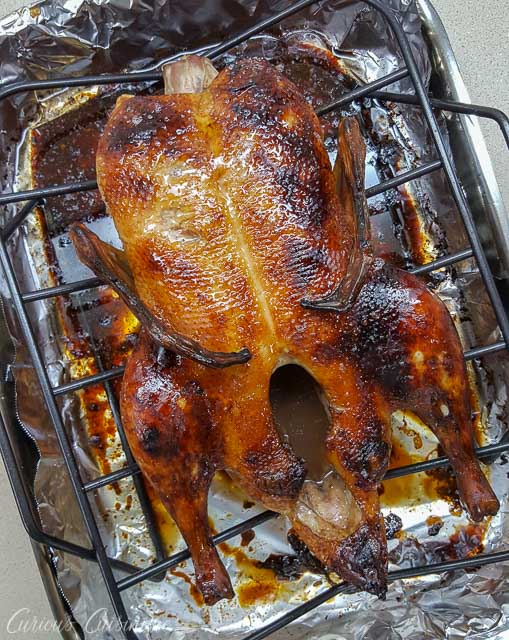 But, that gives you an end product that looks like it came out of a horror movie.

This way is much more appealing.

The second thing we do to prepare the duck for crispy skin is to dry the duck over night in the refrigerator.

The dryness of the refrigerator helps pull moisture from the duck skin. You should visibly notice a difference in the skin after 12 hours. (You can even leave it in there for a couple of days.) 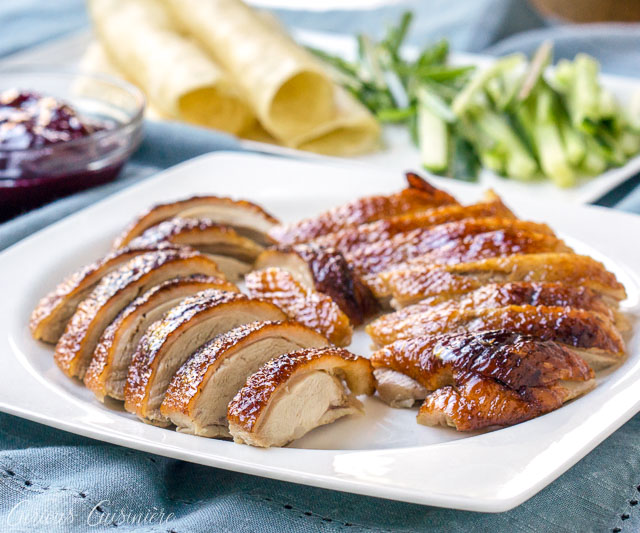 How To Slice Roast Duck

Once your duck is roasted, it’s time to carve it!

A duck is more narrow than a chicken, so at first it can seem a bit tricky to slice.

We find that it’s easiest to simply remove the breast from the carcass. We do this by slicing between the two breasts and around the sides of each.

Then, you can slice between the breast meat and the bone.

Once you get the breast meat off of the carcass, it is much easier to slice thinly for your Peking duck pancakes.

After the breasts are removed, you can remove the legs and thighs by separating them from the carcass at the hip socket with the tip of your knife. These can either be sliced or eaten off the bone. 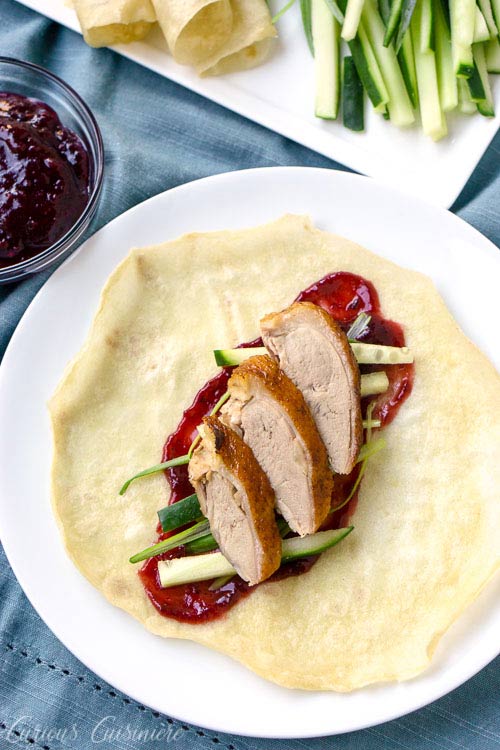 How To Serve Peking Duck Pancakes

Spread the pancake with plum sauce or hoisin sauce. Add some green onions and maybe a few slices of fresh cucumber.

Then, add your duck slices, roll it up, and enjoy!

DISCLOSURE: We received samples of the Merlot wine mentioned below. As always, all opinions are our own.

Since October is Merlot Month, we’re celebrating #MerlotMe by pairing our Peking Duck with Merlot.

While it might sound surprising, the pairing was quite impressive. 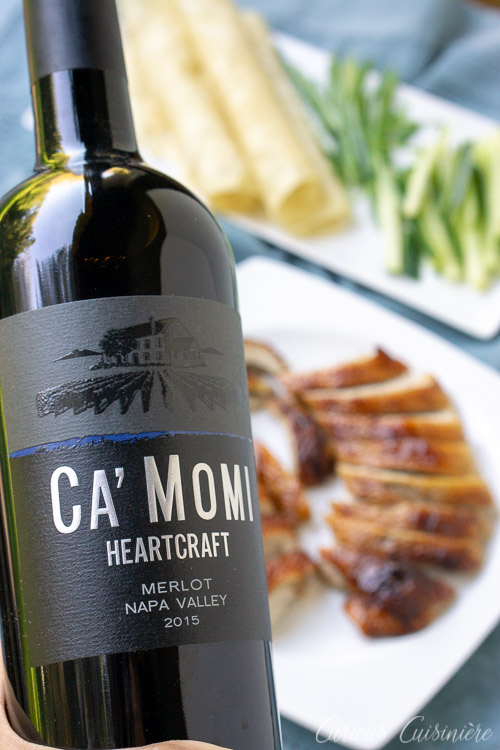 The wine we chose to pair with our duck was Heartcraft Merlot from Ca’Momi.

Ca’Momi was founded in 2006 by three Italians who wanted to honor their roots and bring a sense of the Italian food and wine culture and the everyday celebration of life.

They call their wine Heartcraft. One look at the company and it is easy to see that heart, authenticity, and passion really do run the backbone of all they do.

We found their Napa Valley Merlot bursting with notes of red berries and finishing with a hint of dark chocolate. It had a nice, clean dryness that was balanced incredibly well by the juicy fruit flavors.

As for the pairing, the duck offered just enough fattiness to round out the wine’s tannin and the red berry notes of the wine paired wonderfully with both the plum sauce and hoisin sauce that we spread on our Peking duck pancakes.

Italy and Napa met Beijing on our table in a wonderfully delightful pairing!

We can’t wait to explore more wines from this winery! 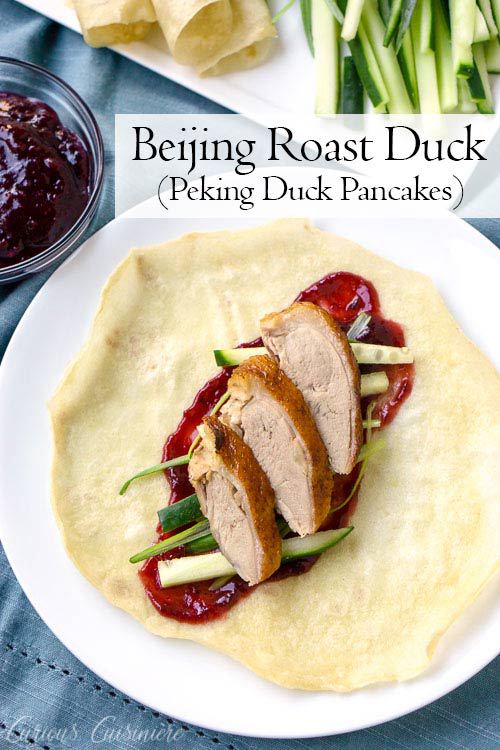 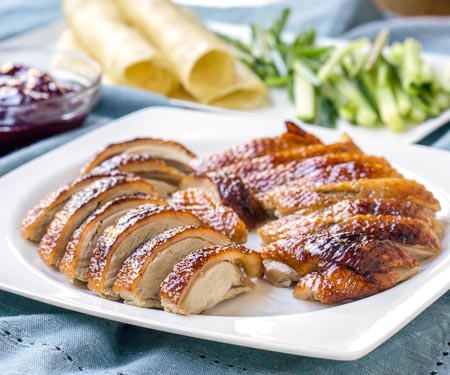 Bring on the Merlot!

Our Wine Pairing Weekend group loves to find creative, new pairings of wines with food. Take a look at all these great pairing ideas!

And as an extra-added, no additional cost to you, here’s a video post from Nick Goldschmidt, winemaker at Goldschmidt Vineyards in Napa Valley!