Moussaka is a Greek eggplant casserole filled with layers of eggplant and a warmly spiced meat mixture, all covered in a rich béchamel sauce. This is a recipe for some serious Greek comfort food! 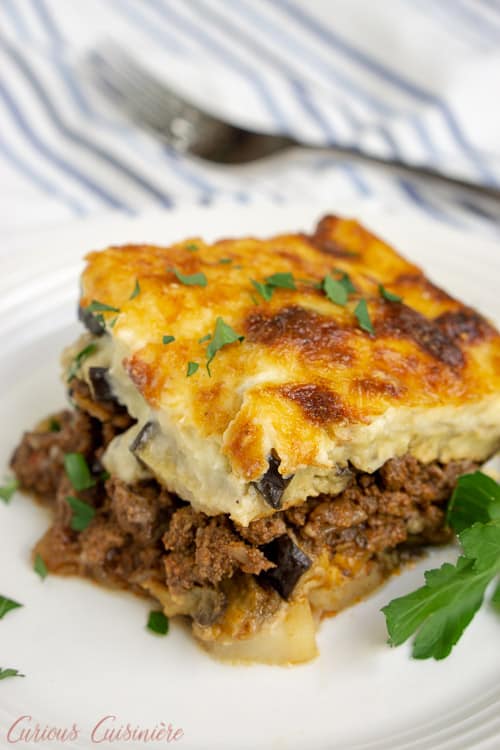 If you think of Greek comfort food, most likely moussaka comes to mind.

Moussaka is a baked casserole filled with layers of flavorful meat and vegetables, most notably, eggplant.

Everything is topped off with a creamy béchamel sauce, a French influence, but one that Greeks quickly took to and called their own for the purposes of this popular dish.

It is believed that Arabs brought eggplants to Greece, and it is likely that they introduced a version of moussaka as well. Over time it evolved into what it is today.

What Ingredients Are In Moussaka?

Moussaka reminds us of Italian lasagna, with the way a number of individually prepared ingredients are layered together and baked.

Inside of moussaka, you will find:

Lamb does have a pretty distinct flavor, and in other parts of the world it’s not as readily available. So, nowadays, beef is considered an acceptable substitute. 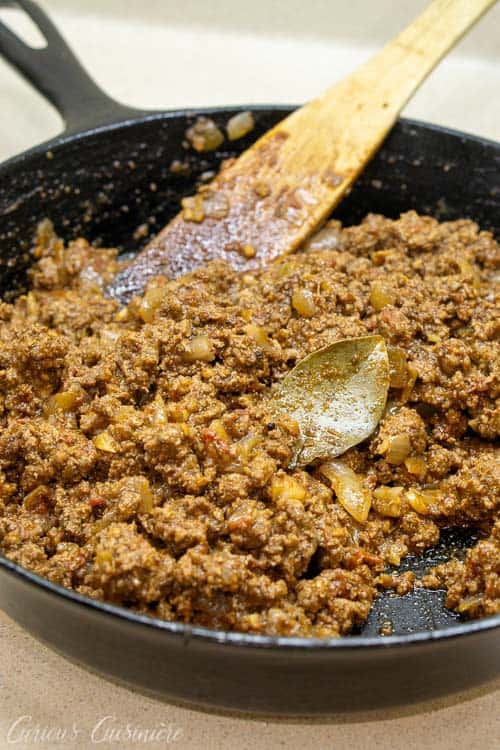 How To Make Moussaka

Making moussaka is a bit of a labor-intensive process. All of the ingredients for the final dish need to be prepared separately. So, get ready to get a few pans dirty.

Here are the basic steps to make moussaka:

What is Béchamel  Sauce?

Béchamel sauce is a rich, creamy white sauce that is made from butter, flour, and milk.

Béchamel sauce is considered one of the ‘mother sauces’ of French cuisine. As such, it is a basic sauce from which many adaptations and other sauces can be made. (Like the cheese sauce you would use to make macaroni and cheese.)

How To Make Béchamel  Sauce

The tricky part to preparing a béchamel sauce is geting a very creamy sauce, with no lumps.

If you’ve ever worked with a roux (a flour and butter mixture) to make a sauce or white gravy, you know that adding the milk to your roux can be a bit of an intimidating task.

Cold milk and hot roux don’t like to mix well.

The trick is to start with lukewarm milk. And to add the milk to the roux a little at a time, mixing each addition in before adding more milk.

This process of slowly adding the milk slowly thins out the roux and evenly distributes it.

We recommend having all of your ingredients for the sauce ready and waiting when you start. That way you can focus on what is going on in your pot.

And don’t be worried if you have a few lumps the first time you make béchamel sauce.

The Béchamel Sauce For Moussaka

Most moussaka recipes take the basic (butter, flour, and milk) béchamel sauce and kick it up a notch with a generous addition of Parmesan cheese, a few egg yolks for richness, and a pinch of nutmeg for depth.

Get ready, because this béchamel sauce is something extra special! 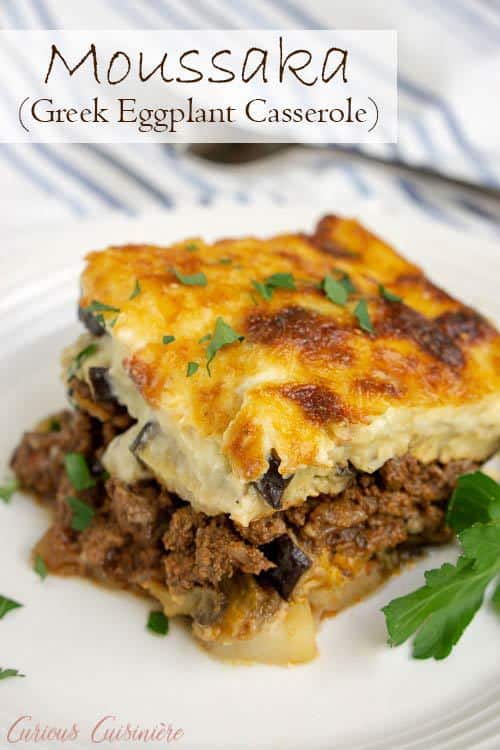 How To Prepare Eggplant For Moussaka

The eggplant definitely takes the most time to prepare of any of the ingredients for moussaka.

But, then again, it is the star of the show.

(Although some would argue that the rich and luxurious béchamel sauce steals the spotlight from the poor, simple eggplant. But, we’ll let you decide.)

First, the eggplant slices need to be salted and left to sweat for around 1 hour. This removes some of the moisture from the eggplant and takes any bitterness that might be in the skins away as well.

After salting, the eggplant is rinsed of the excess salt and patted dry.

Then, it comes time to cook the eggplant!

Traditionally, the eggplant for moussaka is fried. But, honestly, pan frying many many slices of eggplant is a bit time consuming and tedious.

And, if we’re going to bother frying eggplant, we’d much rather just eat those fried eggplant slices straight up, not bury them in a casserole.

The slices lose that fried crispness as they bake anyway.

We’ve made the process of making moussaka a bit more simple and less time consuming by brushing the eggplant slices with olive oil and popping them in the oven to bake. 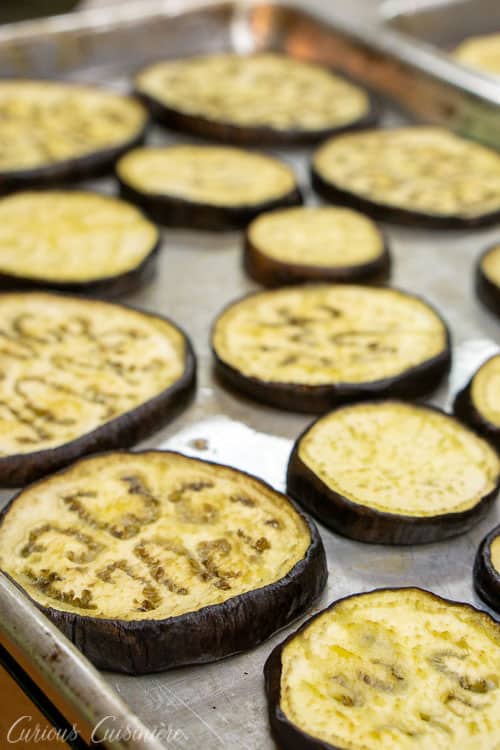 While the eggplant bakes, you can work on other ingredient prep.

And, baking the eggplant makes the whole dish a bit lighter on the calorie end.

Not that you’re counting calories once you get to that béchamel sauce.

But, baking the eggplant does make us feel a bit better about diving unashamedly into the béchamel layer.

It’s all about balance. Right?

If you are a frying fanatic or moussaka purist, you can definitely fry up your eggplant for this dish. We won’t hold it against you in the slightest.

If frying your eggplant, we’d suggest using a technique similar to the way we make our Eggplant Parmesan.

How To Put Together Our Moussaka Recipe

Once you have all of your ingredients and sauces prepared, it’s time to layer the moussaka!

We found that this moussaka recipe filled a 9×13 baking dish to the brim! (So if you have an extra deep 9×13, now’s the time to break it out!) 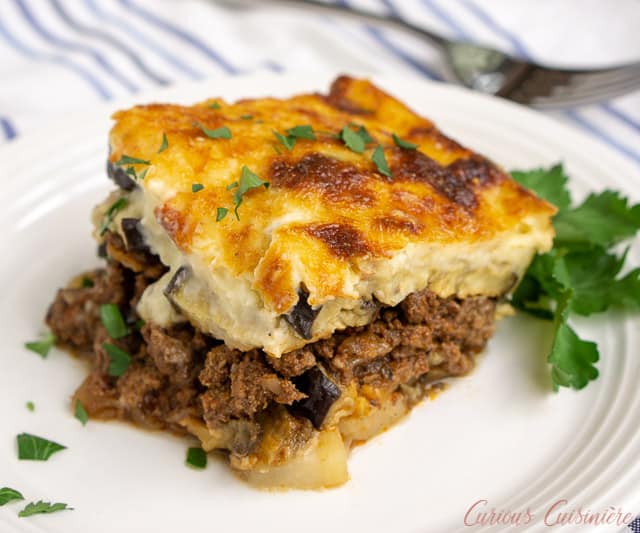 We started with a layer of boiled potatoes to give the moussaka a more sturdy base. (While potatoes aren’t strictly traditional, they are a very common addition.)

Then, we added a layer of the baked eggplant. Followed by the meat sauce mixture.

Next, we arranged another layer of eggplant.

And, we finished everything off with the béchamel sauce. (As a side note, it might look like you have too much béchamel sauce, but trust us, it’s just the right amount!)

Just when you think you’re done, the béchamel sauce gets a nice topping of Parmesan cheese.

And then, you bake this beast until the top turns a beautiful golden color.

A Greek dish that is this much of a labor of love, needs a fantastic Greek wine to pair with it!

We needed a red that was bold enough to pair with the robust flavors of the meat sauce, but not so bold that it overwhelmed the eggplant. It also needed to have a bit of acidity and tannin to be able to cut through the richness of the béchamel sauce and act as a palate cleanser. 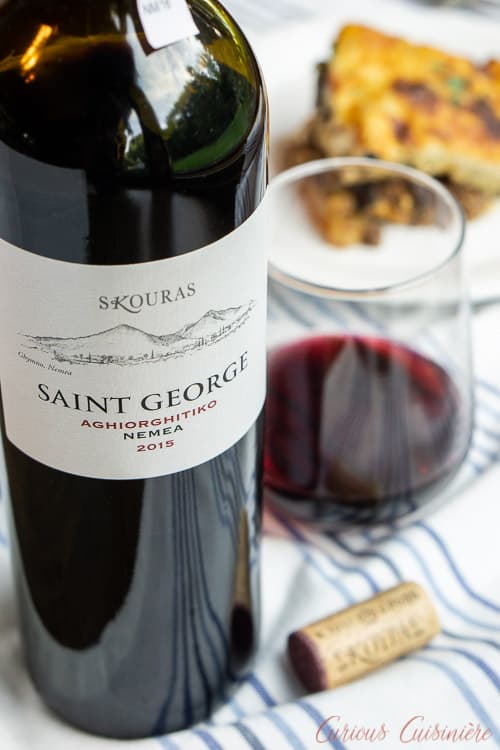 We settled on Aghiorghitiko (or Agiorgitiko), a varietal that is native to Greece, and one that was new to us.

This varietal is one of the most widely planted red grape varietals in Greece. It is traditionally grown in the Nemea region, in the northeastern part of the Peloponnese of Greece (the peninsula in southern Greece).

We chose the Aghiorghitiko from Domaine Skouras and found the wine to be jammy and earthy on the nose, with notes of red raspberry and warm spices.

On the palate we found an abundance of dry tannins, a rich body, and a balanced acidity with notes of tart cherry.

This is a wine that definitely needs some time in the glass to open up, but once it did, we found it to be a wonderful complement to the richness of the moussaka.

A sip of wine after a bite of eggplant, meat, and creamy béchamel cleansed the palate and readied us for another bite.

The wine definitely provided a wonderful pairing and a fun way to dive into native Greek wine with this classic Greek dish! 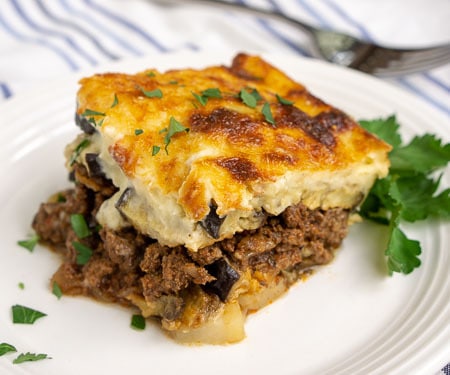 For The Meat Mixture

For The Béchamel Sauce

Assemble And Bake The Moussaka

NOTE: Moussaka can be made ahead of time and refrigerated before baking. Let it come to room temperature for an hour before baking as directed.   It can also be frozen after baking. Thaw on the counter for 8-10 hours and reheating at 250F until warmed through, roughly 1 hour.

If you’re looking for more fun Greek wine pairings, look no further than this collection from the talented Wine Pairing Weekend crew! Thanks to to Cindy from Grape Experiences for encouraging us all to find some new Greek wines to taste! 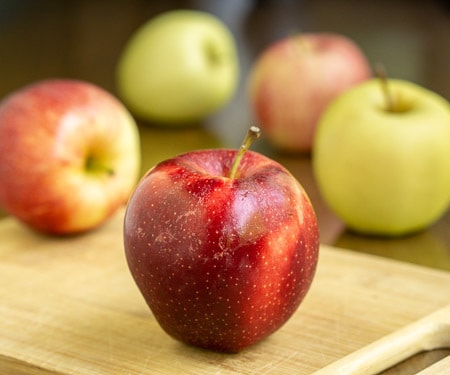 Previous
Apples Around The World 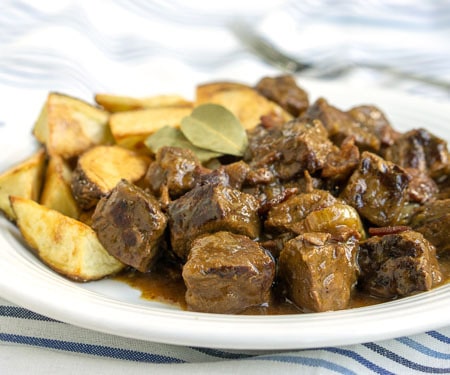 Is it 1Tbs Fresh Oregano or dried?

Hi Sarah, I'm planning to make this in the next day or two but have a question about making ahead of time. Can you make it only hours ahead or could I make this a day ahead? Do I assemble the whole casserole or would I need to refrigerate the bechamel, meat sauce and veggies separately and then assemble the day I plan to serve it? I can't wait to try it!

Hi Barb. You should be good to make this a day ahead. Assemble the whole casserole and refrigerate it. Then, the day you are planning to serve it, take it out of the refrigerator 1-2 hours before baking, so it can come to room temperature. (Bake as directed in the recipe.) Enjoy!

I have a husband who lives to eat. He generally does the cooking, but I'm going to surprise him with this great recipe!

Hope you both enjoy it!

I tried out the recipe. It tasted awesome. Looked great too but on cutting it turned out watery at the bottom. Any suggestions as to why this happened?

Hi Frenaz. Sorry you had trouble with a watery moussaka. My thought is that you probably didn't let enough moisture sweat from your eggplant before roasting it. Eggplant can be tricky to work with, because of its moisture content. So if not enough moisture has been removed from the eggplant prior to layering it into the casserole, it could result in a watery finished dish.

Looks so yummy ... To break the recipe down to serve six is it just half the ingredients only some recipes need to be calculated properly... Thank you in advance

Hi Sandra. Yes, for 6 people you can just halve the ingredients and use an 8x8 baking dish. I would start checking the moussaka 10-15 minutes early on the baking time, just in case it cooks more quickly in the smaller pan. Enjoy!