Ever wondered about the different types of Asian dumplings? We’re breaking down the differences between the types and sharing our favorite recipe for Vegetable Chinese Dumplings! 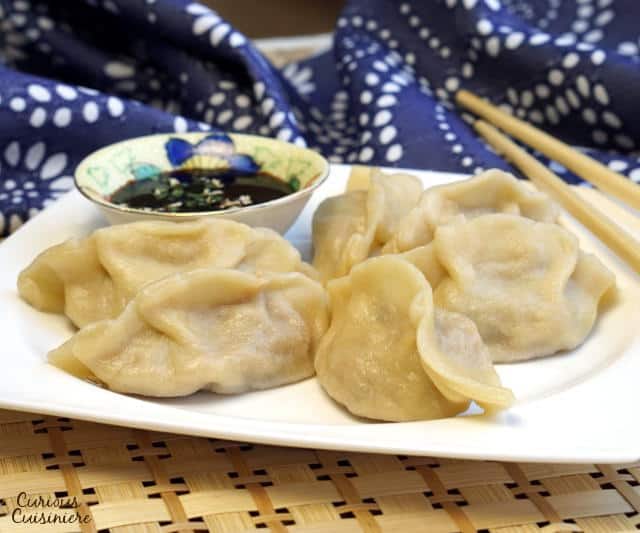 Jiaozi, Chinese dumplings, are an essential part of Chinese cuisine. Dumplings can be found on a Chinese table for breakfast, lunch, or dinner. They can be appetizers, side dishes, or served as the main course.

Dumplings are particularly essential in the celebration of the Lunar New Year. They are shaped like ancient Chinese money, the ingot. and, because of this, dumplings have come to represent prosperity and fortune.

The Difference Between Chinese and Japanese Dumplings

You find dumplings of different shapes and sizes in both Chinese and Japanese cuisine. So, how do you tell a difference between them all?

First off, all dumplings originated in China. The Japanese began to adopt the dumplings after WWII. Japanese soldiers stationed in northern China tasted Chinese dumplings and bought the idea back to their home country when they returned.

Chinese boiled dumplings are, just that, dumplings that have been cooked via boiling. These dumplings are served in broth or on their own with dipping sauce.

Pork and vegetable are common fillings for Chinese boiled dumplings.

Chinese potstickers use the same type of dumpling as Chinese boiled dumplings. However, the dumplings are cooked by a combination of sauteing and a little steam. (You can see the method in our potsticker recipe.) These dumplings end up with a golden crisp bottom, making them texturally different from boiled dumplings.

There are a wide range of fillings for potstickers: shrimp, mixed veggies, or pork and cabbage are very common.

Chinese seamed dumplings use a slighlty different type of wrapper than Chinese potstickers and boiled dumplings, one that is a bit thinner so that it is better penetrated by the steam.

Steamed dumplings can have a number of fillings as well, including pork, shrimp, cabbage, and vegetable fillings. 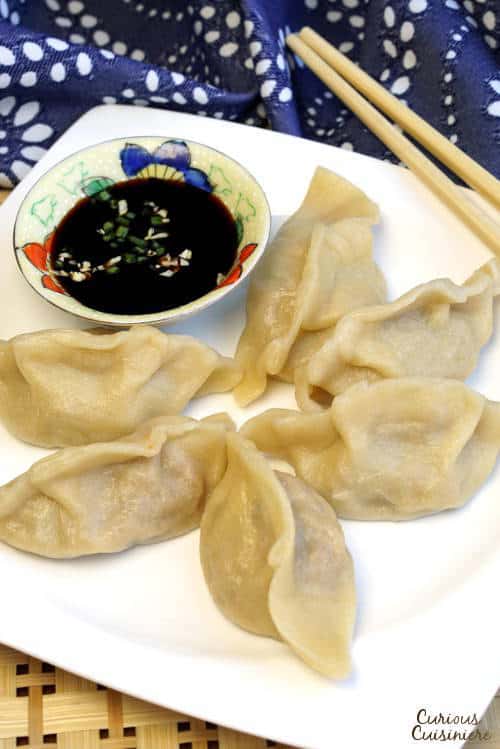 Wontons tend to be smaller than other Chinese dumplings, but a very good way to tell a wonton from a dumpling is by the shape of the wrapper. Wontons use square wrappers, while dumplings use circular wrappers. Wonton wrappers are also thinner and tend to include eggs and salt in the dough.

Wontons are typically eaten in a soup and are most commonly filled with pork or shrimp.

Japanese dumplings, gyoza, are a potsticker, a version of guotie, but with some marked differences. First, gyoza have a thinner skin than Chinese potstickers, making the emphasis more on the filling.

Second, Japanese gyoza are typically smaller than Chinese potstickers: 1-2 bites rather than the Chinese 3-4 bites.

It is very common to see Japaneses dumplings with a filling that includes pork, and they will often include garlic (which is not generally found in Chinese dumplings).

Making dumplings can be a bit time consuming, particularly if you make your own dumpling wrappers, which we have provided you a recipe for below. (You can, however find dumpling wrappers at the grocery store, making the process a bit easier!)

This is a fun recipe to make with friends or the kids, because many hands make light work. And while you’re at it, make a bunch of dumplings and freeze them for later!

When making your dumplings, it is important to make sure that they are well-sealed, or they will pop open when they cook. You can do just a basic pressed seam if you like, that works really well, and is quick! But, we have a tutorial in the video below for a fun ruffling effect, if you feel like trying your hand at it!

You can find store bought duping wrappers in the produce section of your grocery store, or at your Asian market. For jiaozi, just make sure you are getting the round wrappers, and not the square ones!

We use a combination of vegetables, including carrots, cabbage, and mushrooms to create a vegetarian filling that is hearty and flavorful. It definitely doesn’t leave you missing the meat!

And, the great thing about this recipe is that jiaozi dumplings can be used to make boiled dumplings or potstickers.

If you’re feeling the meat, take a look at our Pork Potsticker recipe. You can use that filling to make larger dumplings like we did here or to make boiled dumplings as well! 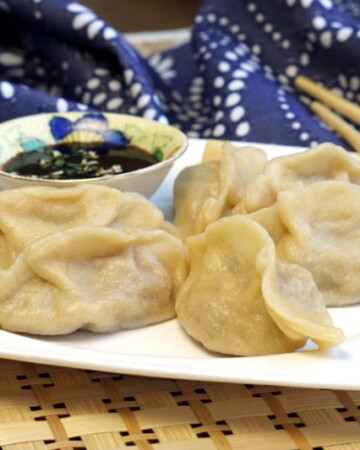 How to Make Jiaozi (Chinese Dumplings)

Filling and Sealing the Dumplings

To Make Boiled Dumplings from Fresh or Frozen Dumplings

To Make Potstickers from Fresh or Frozen Dumplings

If Freezing the Dumplings For Later 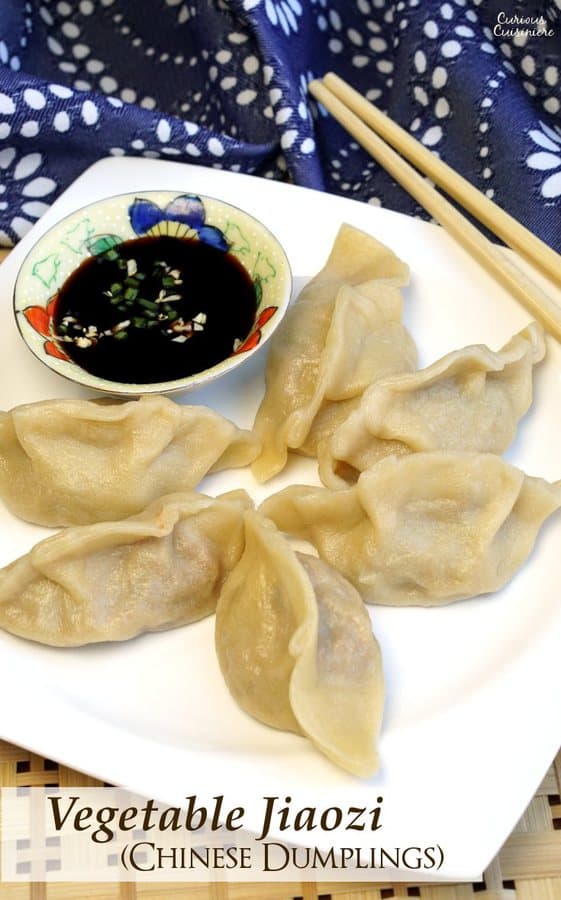 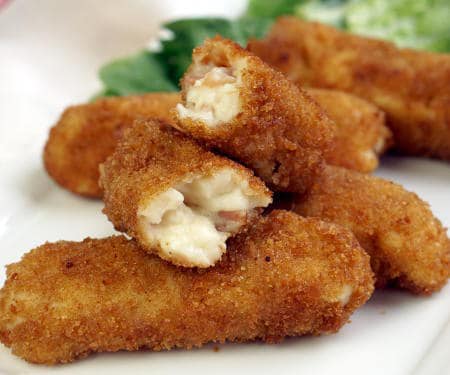 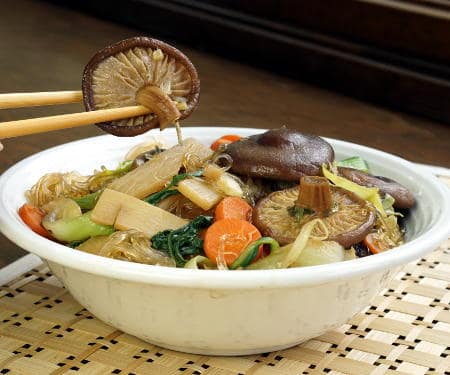 Looks delicious! Question: Do you know if GF flour will produce the same result for the wrapper? So far I'm impressed with what my all purpose 1:1 GF flour can accomplish. I'm hoping it's a yes!

Hello I had a small problem, the mixture ketp breaking into water which made the process of filling very hard. Any solutions? Thanks Rita

Hi GB. We have had some readers make our wonton wrappers with gluten free flours with good results, so I would guess that these would work as well, as long as you're using a gluten free flour you have had good luck with in the past. If you give them a try, do stop back by and let us know how they turn out for you. I'm sure other readers would love to hear about your results. Enjoy!

Hi Maggie. Thanks for your comment. As we mention in the post, there are numerous types of Chinese dumplings. The boiled dumplings and potstickers use the same wrapper, but the steamed dumplings use a different, thinner wrapper. These dumplings use the thicker wrapper, so they are better suited for boiling or pan frying. Enjoy!