When most people think pizza, they think Italy, but Flammkuchen, the crispy and smoky German pizza, is definitely worth your time! 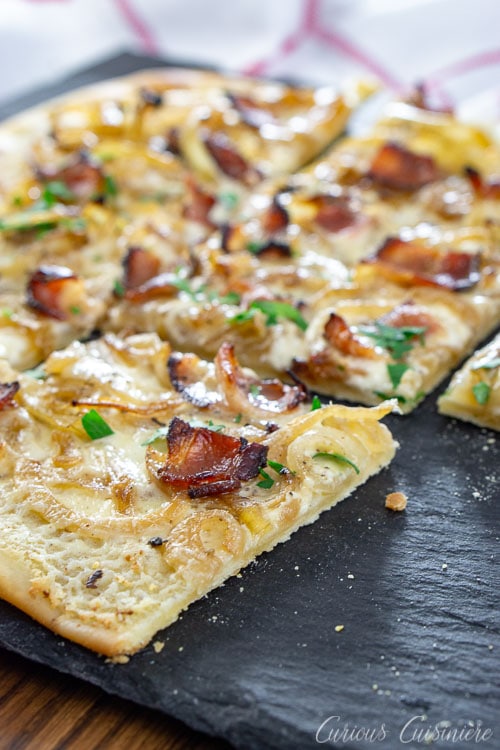 We do love a big slice of saucy, mozzarella-laden, classic, Italian pizza. But, it’s also fun to explore the way that pizza has taken on a life of its own in regions outside of Italy.

Like this specialty of Alsace, France and South Germany: Flammkuchen (sometimes spelled Flammenkuchen).

Flammkuchen (pronounced flam-KOOK-en) comes from South Germany and the Alsace region of France (along the southwestern French-German border).

Translated ‘flame cake,’ flammkuchen were originally used by bakers to test the temperature of their ovens. A bit of dough was taken and rolled flat, topped with crème fraîche, and baked in the wood-fired bread oven for a few minutes.

The amount of time it took for the flammkuchen to bake to nearly-blistered crispness told them the oven’s temperature. If the flammkuchen came out just right, then the ovens were ready to bake their bread! 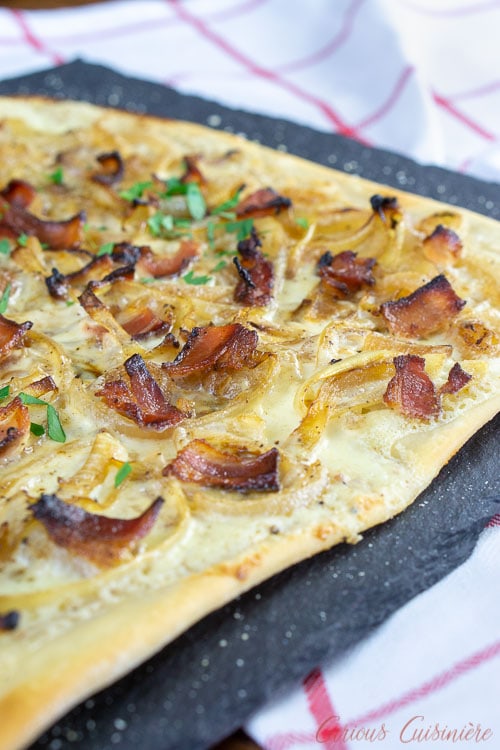 Thin and crispy crust pizza lovers, this pizza is for you!

Flammkuchen is characterized by its incredibly thin, crisp, and blistered crust.

What Is Crème Fraîche?

Rather than a tomato sauce, the dough for flammkucken is spread with crème fraîche (KREHM fresh), a thick, French, soured cream.

Crème fraîche is less sour than American sour cream, so if you can’t find crème fraîche, we recommend using plain, strained yogurt. (Yogurt is naturally thinner than crème fraîche, so we strain it through a fine mesh sieve or cheesecloth to thicken it to a more proper consistency.)

When the crème bakes with the crust, it creates a slightly tart, creamy contrast to the crust’s crispness. 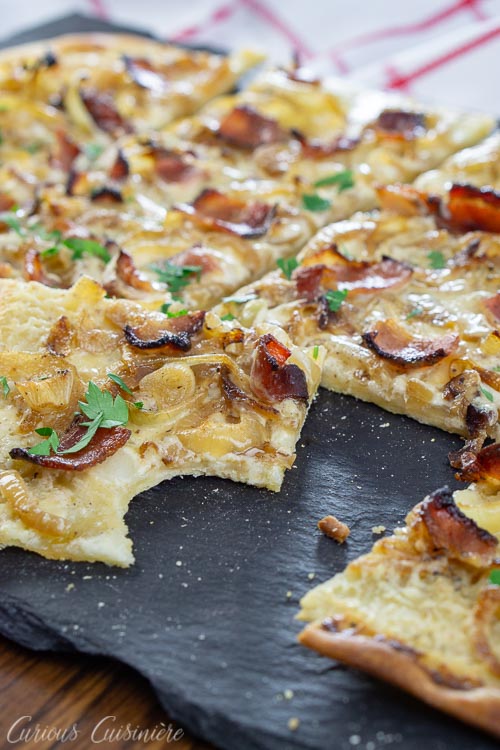 While you can use any toppings that you like for you flammkuchen, the most traditional combination includes bacon and caramelized onions. These are seasoned only with a bit of nutmeg and black pepper.

Other common variations include

You can even find sweet versions of flammkuchen that are typically made with apples, cinnamon, and a sweet liqueur.

We went for the classic caramelized onion and bacon version today. Because, really, how can you go wrong with those toppings?

Crisp, creamy, smoky, with a hind of caramelized sweetness.

This pizza makes for a perfect light dinner or appetizer. 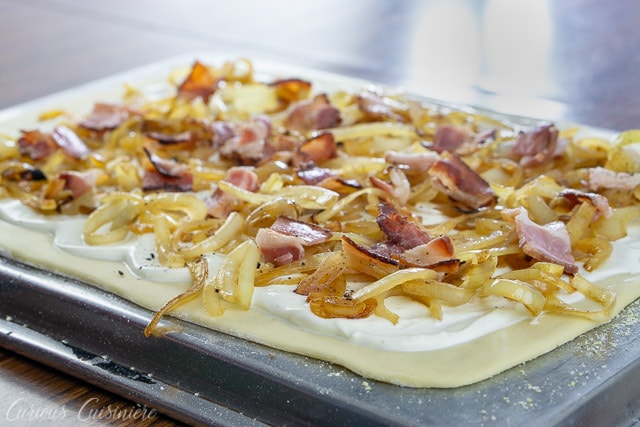 As far as making pizza goes, this flammkuchen recipe is fairly straightforward.

The dough is a simple mixture of flour, salt, water, and oil that mixes together well and kneads nice and smooth. (Kneading to a smooth dough is important because you want your dough to be able to stretch out nice and thin.)

While the dough rests, it’s time to prepare the toppings.

Then, it’s time to stretch the dough. We like to stretch it right onto a baking sheet, that way once it is stretched, we don’t have to move it and risk tearing the dough.

Finally top and bake ’till crispy! 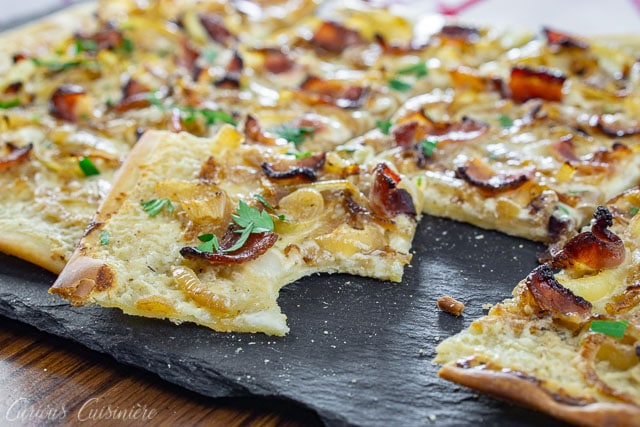 Pizza around the world has taken on some fun twists. If you’re a pizza lover, give these other variations a try too!

And, for your classic Italian pizza, you’ll love our quick and easy pizza dough or our whole wheat bread machine pizza dough recipes.

*To strain your yogurt, place it in a couple layers of cheesecloth in a fine mesh sieve over a bowl for 20-30 minutes.

We love this recipe so much, and we make it often. So, we’ve updated our pictures since we first shared it on Curious Cuisiniere. But we’ve left some original images here, in case you’ve found us in the past and are looking for that old, familiar image. 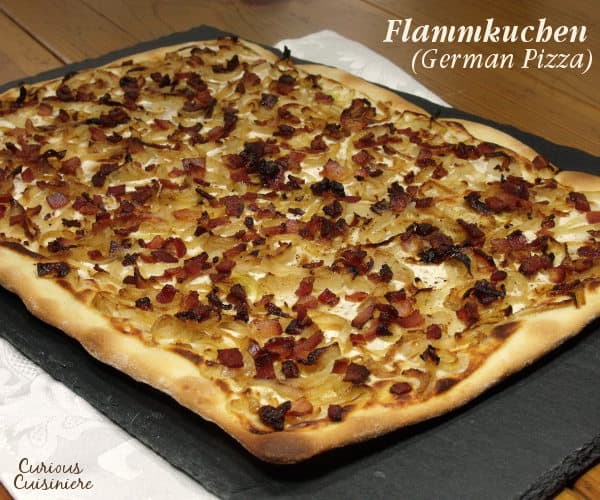 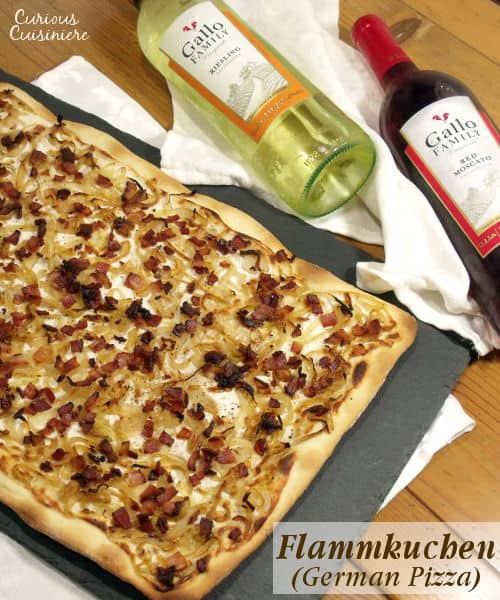 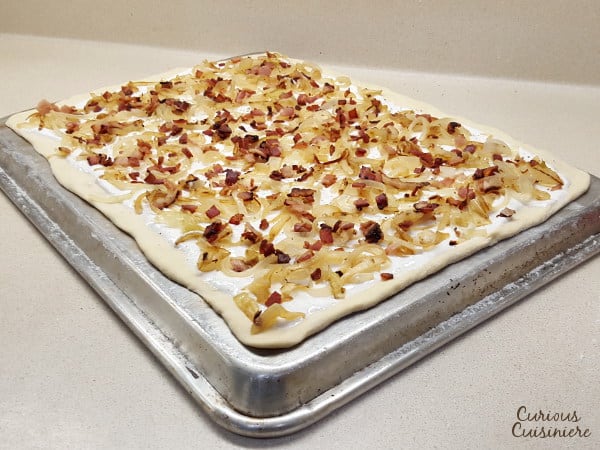 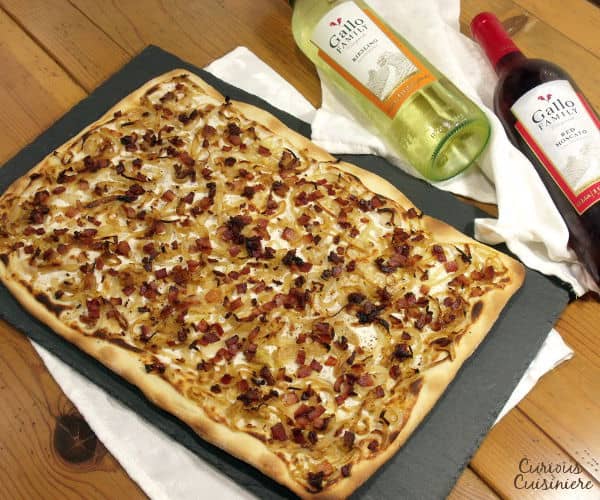