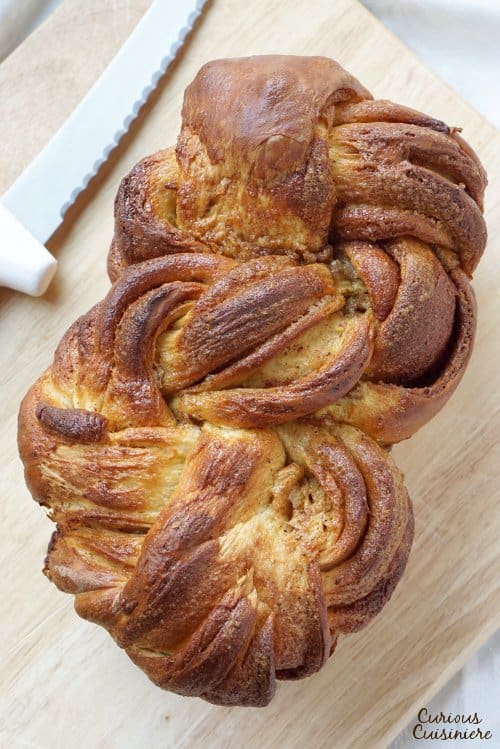 Babka is a sweet yeast bread, kind of like a cross between a challah and a brioche, but a bit sweeter and richer, like Italian panettone.

What makes this sweet bread stand out from the others is the artistic swirl of filling that resides within the fluffy layers.

What Is The Origin Of Babka?

While visions of beautifully contrasted, layered loaves fill our heads when we think of babka in the States, babka hasn’t always looked this way.

If we trace babka’s roots, we find ourselves in Central Europe. Poland to be exact; where the word “babcia” (BAHB-cha) means “grandmother”.

In Poland, they make a cake called “babka,” however it looks much different than the twisted Jewish bread that we are familiar with in the States.

Polish Babka, while still a yeasted, rich bread, studded with sweet elements, typically looks more like a bundt cake because it’s baked in special fluted, bundt-type pans. This bread gained its name because the round, fluted shape looked like a Polish grandmother’s pleated skirt! 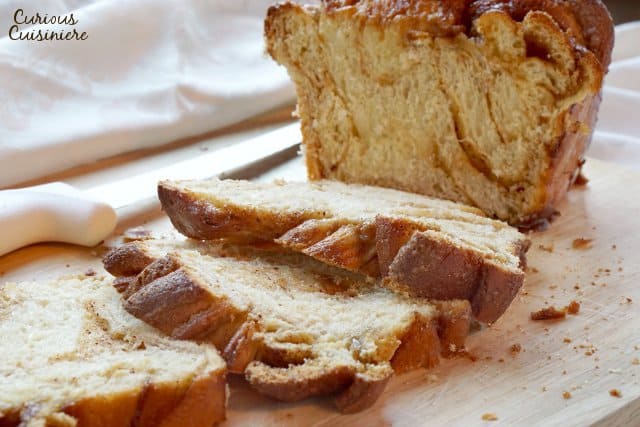 Jewish mothers (and grandmothers) took this idea and started rolling leftover pieces of challah bread with jam or cinnamon filling and baking it along with their Shabbat challah (the challah bread for their Sabbath meals).

It’s this version of babka that came over to America with the Jewish immigrants.

For these families, babka became a treat that reminded them of the mothers and grandmothers who had prepared it back home.

The little leftover loaves became larger, deliberate loaves, even baked by Jewish bakeries. And these rolled treats began appearing on Jewish Holiday tables and at other parties year round. 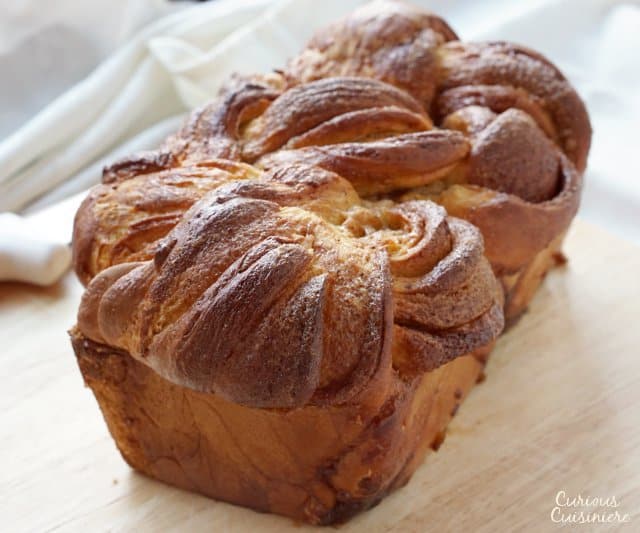 A few years ago, you would have only found babka in Jewish or Eastern European bakeries, where it was often dense and dry, and typically made parve (without dairy) for the Jewish dietary laws.

But, with the exploding popularity of babka, people started adding butter and milk to the dough because of the tenderness those ingredients give the loaf.

To appeal to the American palate, more sugar and butter were used, because what isn’t made better by more butter and more sugar? And, to appeal to the “trendy” American desires, the rolls began to be filled with chocolate spreads (like Nutella), as well as the more traditional traditional cinnamon filling.

We’re sticking with the more traditional version of babka today. Although not parve, we’re keeping the sugar and butter to a more reasonable level. Just enough that they do their job of creating a creamy, tender loaf.

And, we’ve opted to stick with the the cinnamon filling, rather than chocolate. (But, we do give you the option of a chocolate variation in the recipe below.)

Elaine from Seinfeld might think that cinnamon babka is the “lesser babka”, but we’d have to disagree.

Sure, you can’t go wrong with a chocolate laden loaf, but this cinnamon babka is like a cinnamon roll in loaf form.

And, we are seriously addicted. 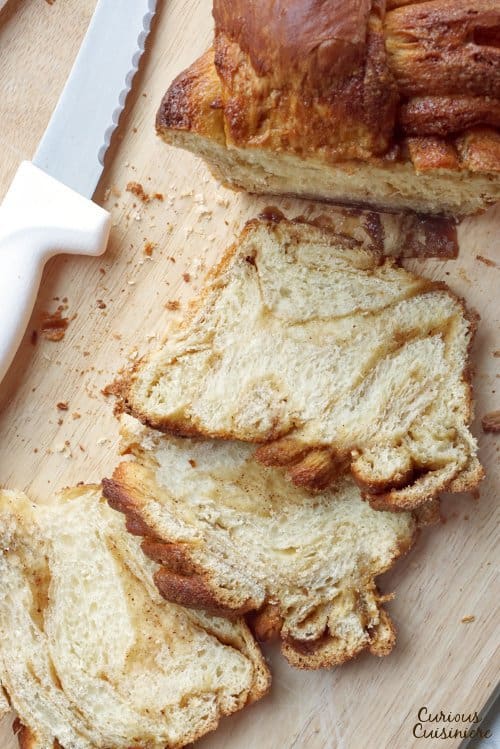 How To Make Babka In The Bread Machine

The dough for babka is a rich yeast dough, full of butter and eggs. Richer doughs tend to be quite soft, making them difficult to knead by hand and the perfect candidate for a long kneading time with a dough hook in a stand mixer.

Rather than putting our stand mixer to work, we decided to make the dough for our babka in our bread machine, using the dough setting.

What we like about the bread machine is that after prepping your ingredients you can forget about the dough for a while. And, you don’t need to dirty two bowls for mixing and rising.

You just let it go.

And, once the kneading of the dough is put on auto-pilot, making babka goes from a long, labor intensive process, to an easy process with much less hands-on time.

When making babka is this easy, it’s borderline dangerous!

How To Twist Babka Dough

What sets babka apart from every other loaf of cinnamon bread or a pan au chocolate is the beautiful layered look that twists its way through the loaf, making each slice a new visual adventure.

There are a number of ways to achieve this elegant look, but all are variations on the same concept.

First, you start by rolling your dough out into a large rectangle and covering the rectangle with filling. Then the filling gets rolled up with the dough, creating a long roll (which would be chopped into 1 inch sections, if you were making cinnamon rolls).

Here’s where things get fancy (and messy).

Once you have that long, filled roll, you slice it down the middle, lengthwise, exposing all of those filling layers.

Now you have two strands that you can twist together, keeping the cut/filling sides up as much as possible.

You can put this twisted beauty into your greased loaf pan. Or, you can take things one step further and twist this rope into a figure 8 shape before placing it into your loaf pan.

It’s a messy business, but it’s quite fun to play with the dough, twisting and shaping, wondering what it’s going to look like in the end!

How To Serve Babka

And, then, there’s the moment of truth.

Your first slice into your artfully twisted loaf.

No matter how the layers played out, you know one thing for sure. You now have a delicious, warm slice of babka calling your name!

We have to admit, babka is best eaten fresh. The oven crisped top, warm and fluffy inside, and gooey and caramelized filling can’t be beat.

The day it’s baked, you have some serious babka perfection.

But, the nice thing about this recipe is that the moisture from the filling and the richness of the dough keeps the bread fresh for about 3 days if kept in an airtight container on the counter.

After 3 days, you’ll want to refrigerate the rest of your bread (if there’s any left). Once refrigerated, we prefer to toast up our slices before serving.

Now that’s the perfect way to start the day! 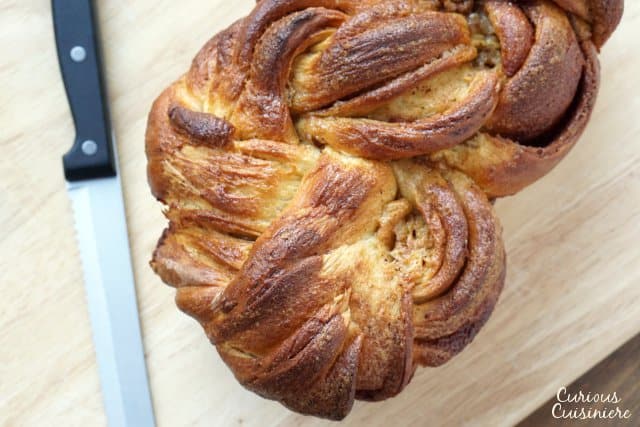 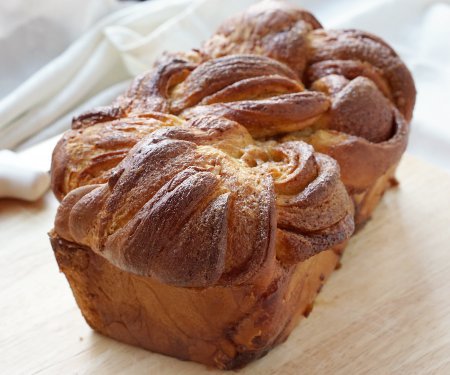 Cinnamon Babka (In The Bread Machine)

For the Egg Wash

For The Dough (Bread Machine Version)

For The Dough (Stand Mixer Version)

Putting It All Together

For A Chocolate Filling: Melt ¾ c semisweet chocolate chips with 4 Tbsp butter in a small saucepan over low heat. Mix in ¼ c cocoa powder. Let the mixture cool slightly before spreading it on your dough. OR Use 1 ½ cups of Nutella. 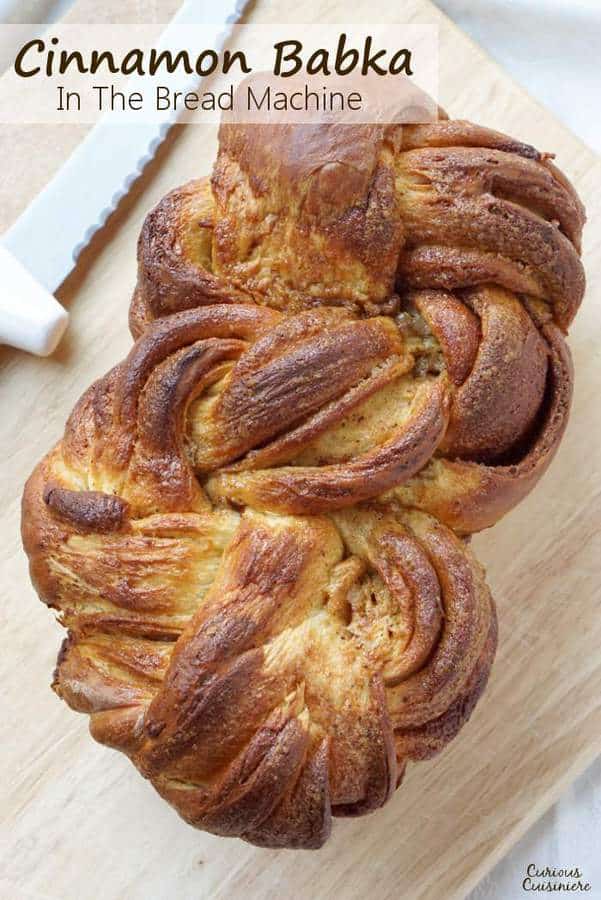