A light and tropical Brazilian Fish Stew, Moqueca brings coconut milk and citrus together in a tasty dinner recipe. 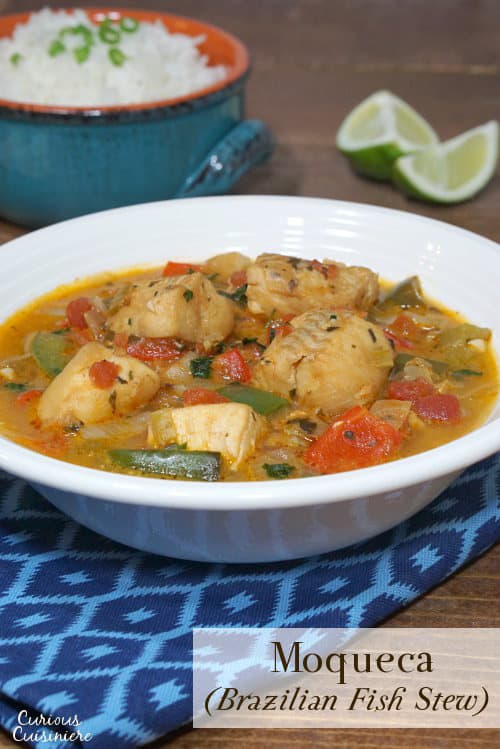 Moqueca (pronounced mo-KEY-kah) is a Brazilian recipe that comes from the Northeastern region of Bahia.

You’ll find many variations on the dish using different types of seafood from fish to shrimp, even crab, but the basics are always the same: onion, garlic, cilantro, tomatoes, and a lightly creamy sauce from coconut milk.

The fish stew is traditionally served with white rice to soak up all the delicious broth.

The stew gets a nice brightness from the lime and tomatoes, but it’s the coconut milk that really brings this stew together. Creamy enough to round out the flavors, but light enough to keep the stew from getting too heavy, the coconut milk really does make this a perfectly comforting stew for this time of year! 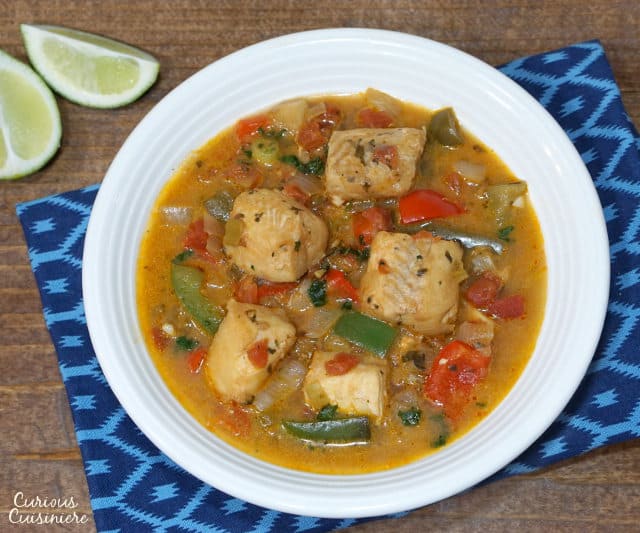 Choosing Fish For Your Moqueca

The name Moqueca refers to the sauce, so you can have a Moqueca with any number of different types of seafood.

The main thing you want to keep in mind when you are choosing your fish is that it should be firm so that it doesn’t fall apart in the simmering broth. Haddock, cod, grouper, striped bass, red snapper, mahi mahi, and swordfish are all great choices. Shellfish is also often mixed into the stew. Shrimp, prawns, lobster, crab meat, mussels, etc are great choices.

We kept our stew simple, just using some nice firm haddok. But, feel free to use this recipe as a starting off point, and throw in whatever seafood sounds tasty to you.

Palm Oil or No Palm Oil in Moqueca?

Traditionally, Moqueca is made using palm oil, which has a natural reddish color that gives this fish stew its characteristic red hue. Since sustainable palm oil can be difficult to find, we’ve substituted olive oil and added a bit of paprika to the recipe to achieve the characteristic color. 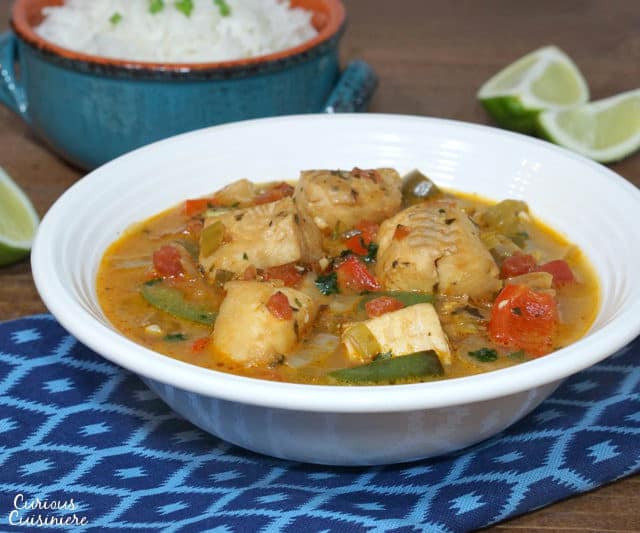 We’d recommend pairing this stew with a light white wine, like a Sauvignon Blanc or Pinot Grigio, that has a bit of acidity to complement the lime and tomatoes in the stew.

More fish and seafood stew recipes from around the world

If you love fish and seafood then you will want to check out these recipes for soups and stews that are a comforting way to serve seafood in the cooler months. 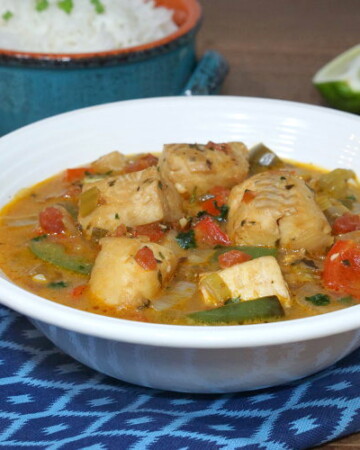 There is two traditional recipes in Brazil. From two states (Bahia and Espiríto Santo). The flavor from Espírito Santo is more soft.

Thanks for sharing this insight Renato!

Your Moqueca recipe sounds absolutely devine. I love the use of limes in a stew. Wonderful.

Thanks Colleen. They really give the stew a fresh, tropical flavor!

Delicious and tempting bowl of stew.

So happy you've joined the group!! Your dish looks amazing! I can't wait to try it!

Thanks Karen! We're trying to cook more Fish, so it is perfect! Everyone's recipes are so inspiring!