This one recipe will let you make Indian Roti, Chapati, and Puri. And, we’ll dive into the differences between these breads and other Indian breads, like naan. Get ready to learn how easy and fun it is to make Indian flatbread! 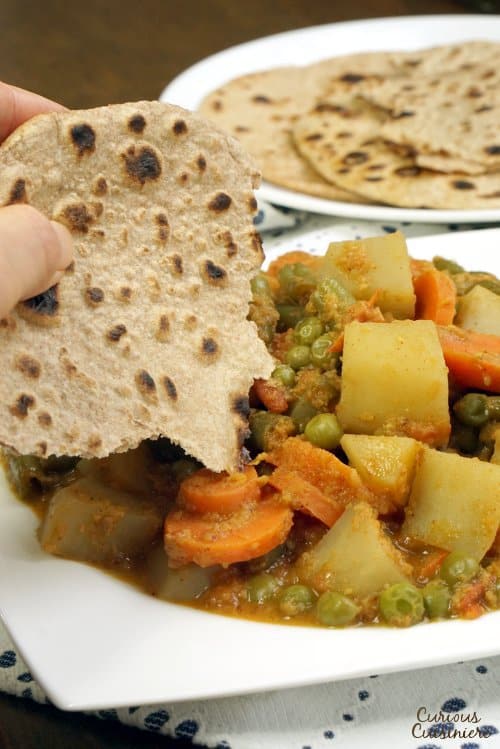 Indian cuisine has many types of  flatbreads, and sometimes it can be difficult to tell them apart.

So, lets take a look at some of them side by side.

Roti means bread, specifically unleavened bread.  But, while this is our basic, general Indian term for bread, it is also the name of a particular type of bread.

Roti (sometimes also called phulka, meaning “puffed”) is an unleavened bread that is made from wheat flour and water.

The rounds are traditionally cooked on a hot tava (or tawa) griddle. (A cast iron skillet makes a great substitute!) Sometimes you will find roti finished over an open flame, which really encourages a nice puffing!

What really makes roti different is that there is no ghee (clarified butter) or oil used on the skillet. It is cooked completely dry.

This bread is characterized by the way that the heat of the hot skillet makes the dough puff up into something that resembles a very thin walled pita bread. 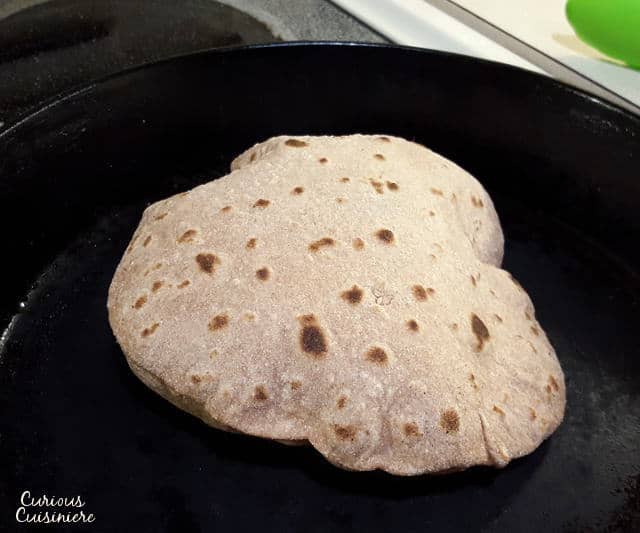 Chapati is the exact same as roti in many parts of India.

However, in the southern part of the country, the only difference is that the unleavened wheat dough is cooked in just enough oil to very lightly fry it.

Puri the third variation on the basic roti.

In this case, the same, thinly rolled, wheat dough is deep-fried.

Paratha is another unleavened bread, cooked similarly to chapati. However, the dough is shaped by a process of folding and rolling, giving it a different texture.

Paratha is often stuffed with other ingredients such as potatoes, peas, eggs, or really anything!

While the other flatbreads are typically eaten as an accompaniment to a meal, stuffed paratha are commonly eaten as a meal themselves.

We’ve pretty much only been talking about unleavened breads (breads without yeast, baking powder, or baking soda) up until now. So, we’ll touch only briefly on the classic Indian leavened bread, naan.

Naan is traditionally cooked inside a tandoor (a clay oven). 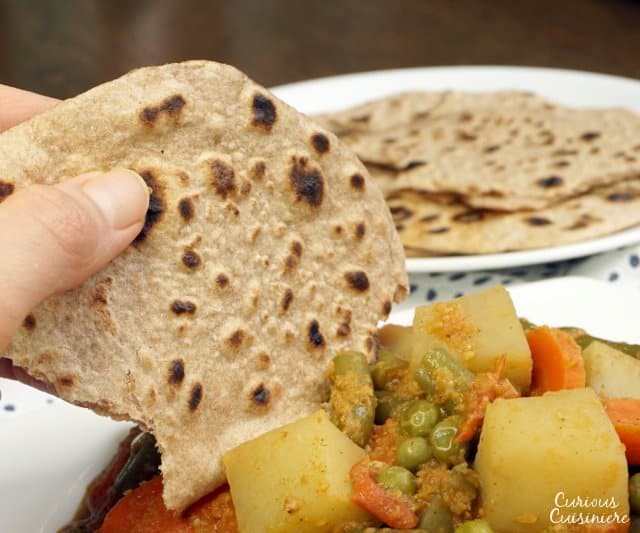 The fun thing about Indian unleavened flatbread, is that once you have the basic recipe for roti, you can make chapati and puri too.

It all depends on how much oil you’re willing to use!

The process really couldn’t be more simple: flour and salt go into a bowl and then warm water and a little liquid fat are mixed in.

We like to use our hands to do the mixing because you can really keep a pulse on how much moisture you are adding to the dough, making it easier to get the amount just right!

You will need to get your hands dirty anyway when you knead the dough, because with so few, simple ingredients, a really good kneading is what gives this bread its texture and softness.

So. Let’s get bread-making!