Pan de Muerto is a light and sweet Mexican Day of the Dead bread, traditionally spiced with ground anise and brushed with an orange glaze. 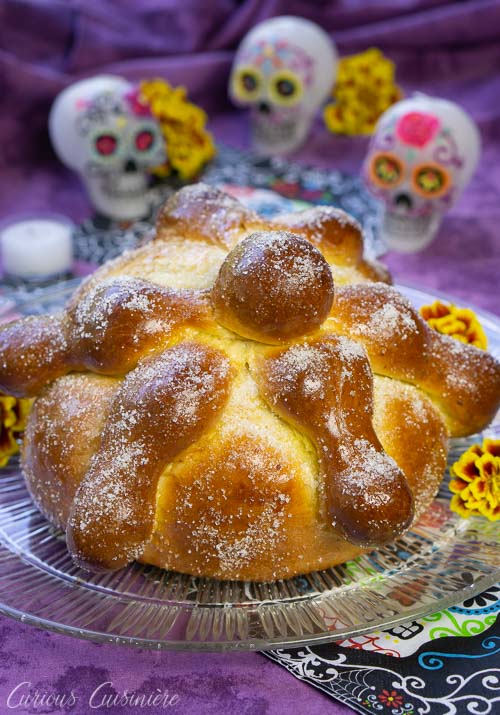 Pan de Muerto, or “Bread of the Dead”, is a sweet bread that is baked during the Dia de los Muertos, or Day of the Dead, celebrated in Mexico on November 1st and 2nd.

It is a light and egg-y sweet bread that is shaped as a round loaf or smaller round rolls.

Both loaves and rolls are decorated with bone-shaped strips of dough to honor the celebration of those gone before.

Dia de los Muertos: A Celebration of the Dead

The most prominent symbol of Dia de los Muertos is the calacas and calaveras, or skeletons and skulls. From parades to decorations, even to foods, images of bones are everywhere.

Sugar skulls and chocolate skulls are often given as gifts. 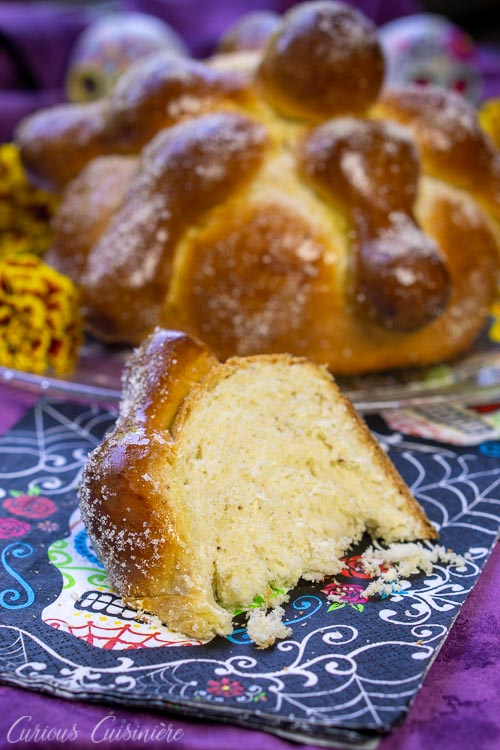 In larger cities, you will find parades filled with dancers, musicians, and many people dressed up like skeletons.

One of the most popular figures to dress up as is La Calavera Catrina (The Elegant Skull), a skeleton who resembles an upper class female, showing that, in death, rich and poor are the same.

Despite the multitude of skeletons prancing through the streets and the belief that spirits return to be with their families, the festival is not scary, somber, or macabre. Rather, it is a joyous event, full of parties, good memories, and good food.

The festival celebrates death as a natural part of the human experience: as natural to celebrate as a newborn baby, a coming of age, or any birthday.

Through the celebrations and decorations of graves and home altars, the dead are remembered and honored. 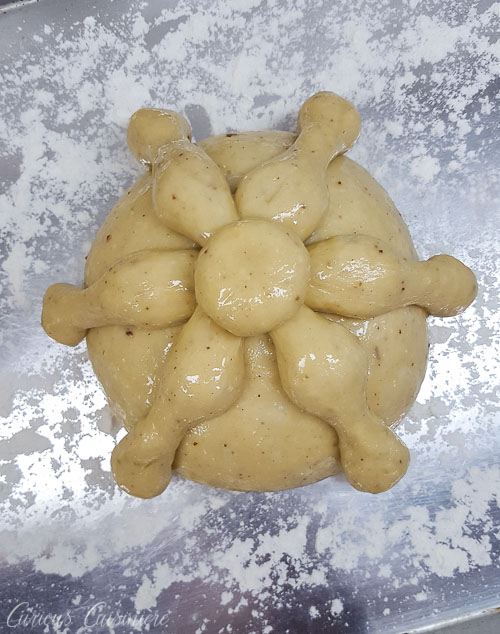 Small strips of dough arranged over the larger round of dough to look like a pile of bones.

During Dia de los Muertos, it is common to eat Pan de Muerto as well as other foods that were loved by those loved ones who have died.

The skeleton and bones that are found throughout the celebration of Dia de los Muertos are also found atop Pan de Muerto, giving this bread a very unique appearance.

The idea is to create the look of a pile of bones atop your bread (or roll).

Our Day of the Dead Bread Recipe

Like many other sweet breads (such as challah of Finnish pulla), the dough for this bread is a “rich dough” that consists of milk, eggs, and butter.

Pan de Muerto is commonly lightly flavored with anise and given an orange glaze after baking.

The warm spice and orange combo is one that is familiar in the fall. And it is common in other Day of the Dead foods, like calabaza en tacha (Mexican candied pumpkin). 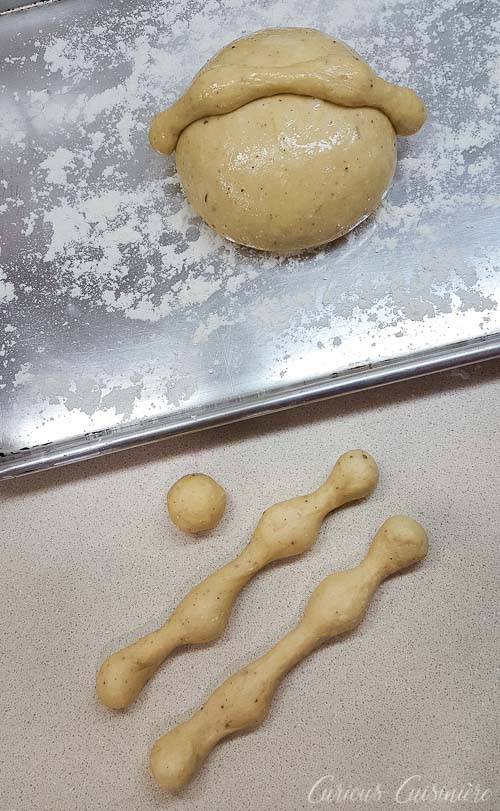 Three strips of dough rolled into “bones” and one very small piece of dough to top it all off.

To create the topping of ‘bones,’ for our Day of the Dead bread, divide the dough into a larger portion and a few smaller portions.

If you roll the small portions into a rope, keeping your fingers roughly in the same place, you will create 4 little nobbies on the rope. When arranged on the bread, these look remarkably like a pile of bones.

It is most common to arrange the bones in a circle pattern, representing the circle of life.

As the dough rises and bakes, the circle of ‘bones’ may shift a bit, but that’s more than ok. It adds to the rustic appeal of the bread! 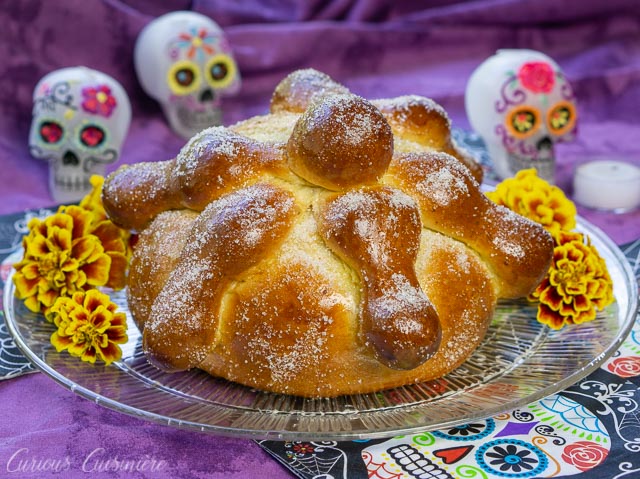 Even if you’re not celebrating the Day of the Dead, this bread is a tasty, sweet and eggy bread that would make a delicious addition to a Halloween party spread as well. 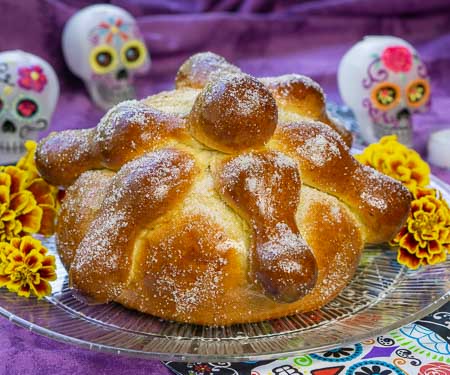 For the Glaze and Topping

NOTE: This recipe from 2015 was updated in November 2019. We made a few tweaks to make the bread even better. Enjoy!

We’ve updated our pictures since we first shared this bread on Curious Cuisiniere. Subsequent times we’ve made it, we’ve decorated it following a bit more closely the traditional technique. We’ve left our original images here, in case you’ve found us in the past and are looking for that old, familiar image. 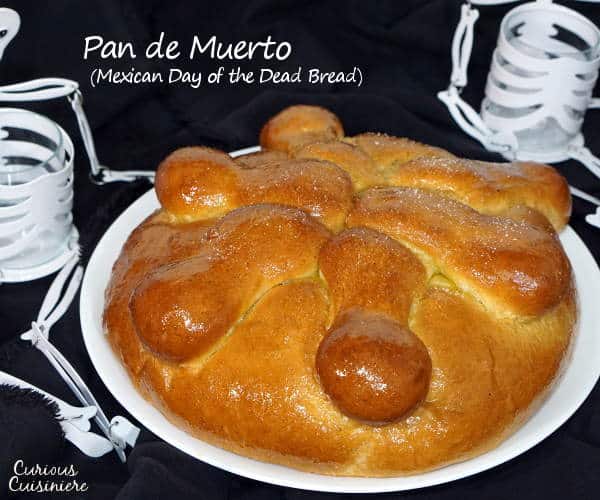 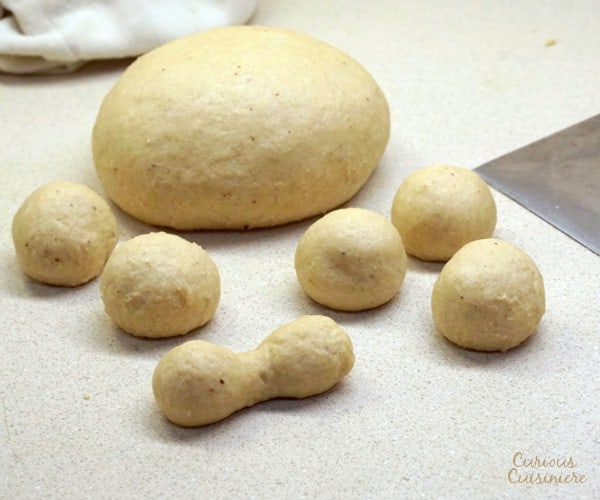 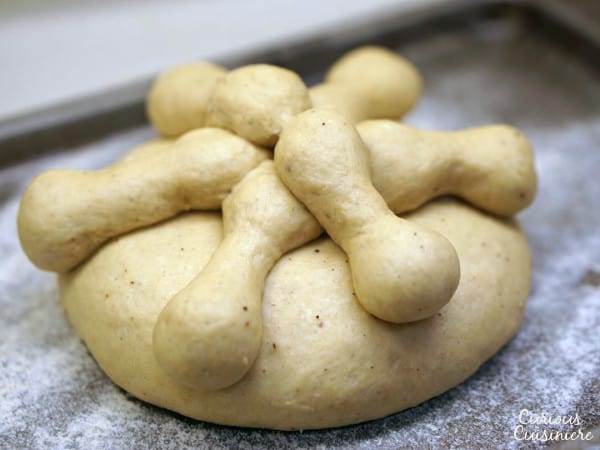 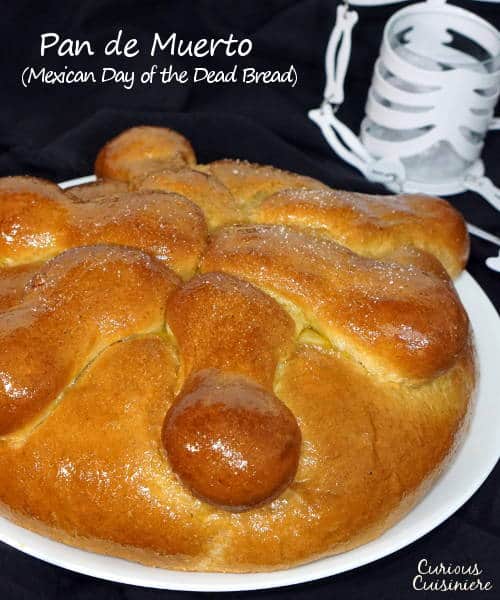