Our Polish Borscht recipe (Barszcz) creates a beet soup that is chock full of veggies and boasts a bright, sweet and sour flavor making it a perfect first course or warming meal. 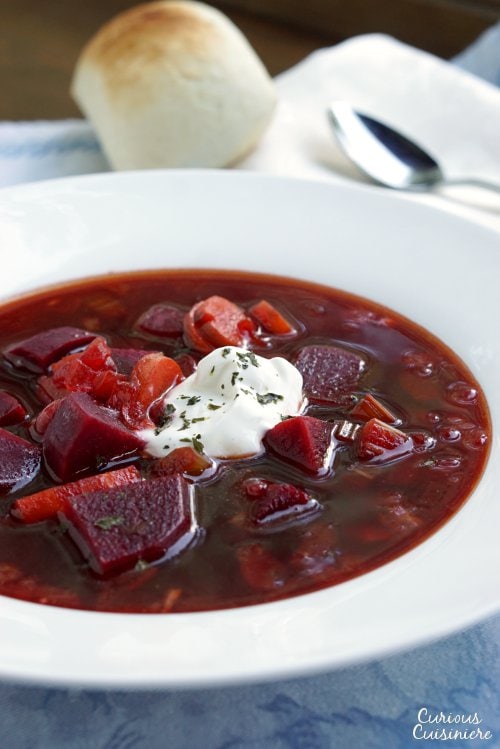 What Do You Do With Beets?

Don’t you just love the beautiful color beets give to everything they come in contact with?

Well, maybe not your fingers.

Then it’s a little disconcerting when the red just won’t come out.

But to everything else, beets bring such beautiful color!

Especially to a comforting bowl of beet soup!

The Many Faces Of Borscht

Borscht is a popular soup in many Eastern and Central European countries. And, while the soup’s ingredients (and spelling) vary by region, beets are the common thread throughout.

Often for Polish barszcz, the soup is strained after cooking to produce a pure, red broth. This glassy broth is eaten with uszka, or mushroom-filled dumplings. It is this version of borscht that is commonly found on a traditional Polish Christmas Eve dinner tables.

But that’s not the version of borscht we’re talking about today. 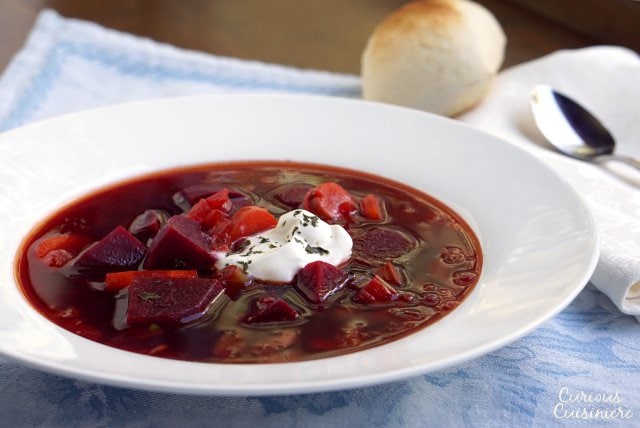 The most traditional recipes for Polish borscht start by fermenting beets and using the resulting sour fermenting liquid (much like the sour rye mixture use to make Polish white borscht).

This sour liquid, combined with the sweetness of cooked fresh beets and vegetables, gives the soup its characteristic sweet and sour flavor.

Since most modern kitchens don’t tend to have beets fermenting on their counter, and fermenting beets adds a bit of time to the preparation process for this soup, many modern recipes will skip the fermented beet portion of the borscht recipe. Instead, they will either leave out the sour element to the soup or use some vinegar (and/or a sour cream garnish) to add the sour flavor in.

For our barszcz recipe, we are using apple cider vinegar to give the soup its characteristic sour flavor. And (as a bonus), it really nicely plays up the sweetness of the beets.

How To Make Beet Borscht

Borscht really is such a simple soup to make. Peeled and cubed beets are cooked with a variety of vegetables, giving of a beautiful color and wonderful aroma.

Some recipes will have you cook your beets first by either roasting or boiling, before peeling them and adding them to the soup.

We prefer to peel the raw beets and cook them right along with the rest of the veggies, in the traditional Polish fashion.

Not only do you skip a step, making this soup come together incredibly quickly, the raw beets add such a beautiful, deep color to the borscht.

And, since we like our soups hearty, we’ve left the veggies in our finished borscht. 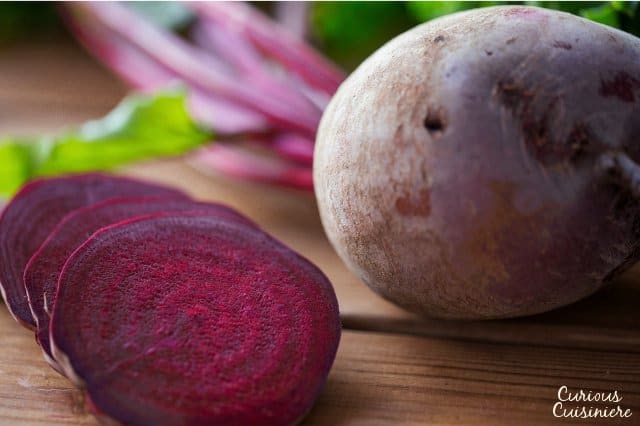 How To Serve Polish Borscht

Since we like to keep our veggies in our beet soup, it’s hearty enough to serve as a main dish along with a good, fresh loaf of really crusty bread.

If you’d like to serve this soup as a first course or appetizer, smaller servings work great. Or, you can strain out the veggies and serve the clear borscht in a more traditional Polish fashion as a first course.

First course or main dish, a dollop of sour cream in your bowl adds a nice bright contrast and a creamy smoothness to round out the texture of this flavorful, brothy soup.

If you’ve never tried beet soup, you really must! It’s a winter staple in our house!

And, if you can’t get enough of those beets, try this chilled beet soup for warmer days!

This recipe from 2013 was updated in October 2017. We made the soup even tastier! Enjoy!

This is one of the recipes from the early days of Curious Cuisiniere. We’ve updated our pictures since we first shared it, but we’ve left some originals here, in case you’ve found us in the past and are looking for that old, familiar image. 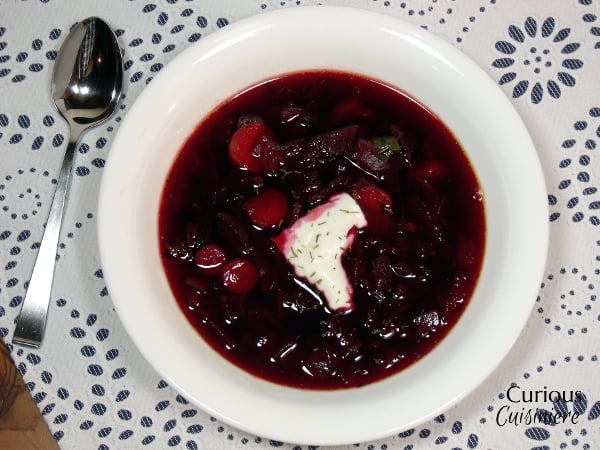 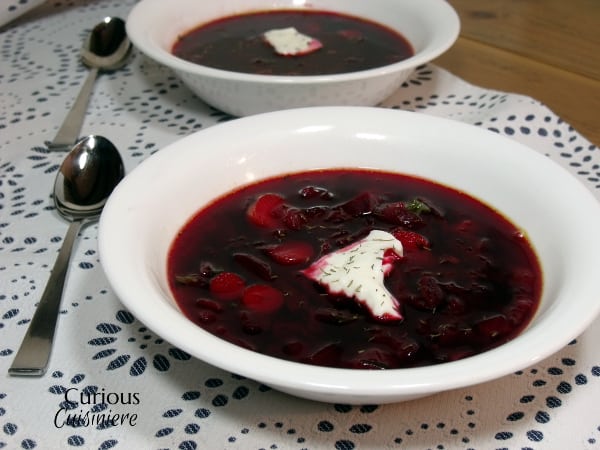 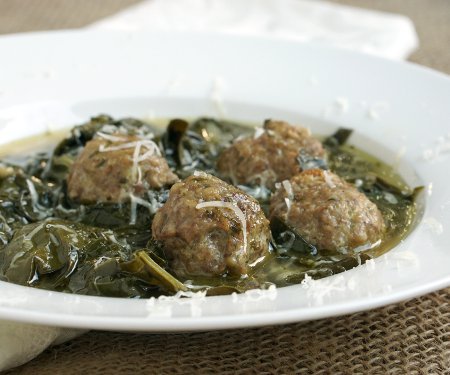 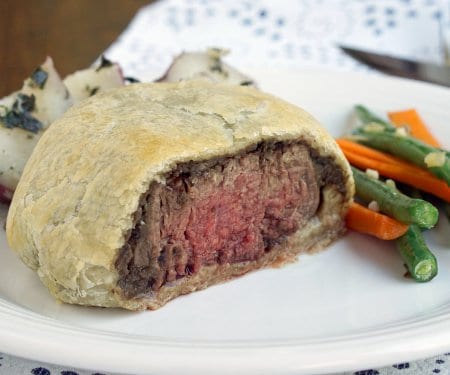 Hello! I’m excited to try this recipe! I was wondering how much ground allspice to use since I was unable to find the berries?

Hi Alyssa. I would use 1/8 tsp ground allspice. Enjoy!

Just followed this recipe for hosting my family for a traditional Polish Wigilia and this was a huge hit! My family was very impressed and thought it tasted just like the original barszcz they are accustomed to! Thank you so much for the recipe!

So glad you and your family enjoyed it! Merry Christmas!

Hello, Sarah - could this recipe be adjusted easily for the Slow Cooker/Crock-Pot? I'm putting together a collection of Polish-American slow-cooker recipes, and I'm surprised because I can't find any for barszcz. Perhaps I just need to experiment with yours. BTW, my late mother was born in Gniezno, near Poznań.

Hi Cecilia. We had the fortune to visit Gniezno on our trip to Poland, such a beautiful market square and basilica! You know, I bet this recipe would work well in a slow cooker. I would saute the vegetables in a separate skillet first, to get that nice caramelized flavor, then transfer to the slow cooker. You will also want to add the vinegar only within the last 10 minutes before serving, so it doesn't lose its pang. You'll likely need to play around with the recipe a bit to see how long you would want to cook it and on what setting. Best!

Glad you enjoyed the recipe Chris!

Barszcz, traditionally and most importantly, starts with fermented beets & resultant sour juice... That is the source of sourness & color. Cooked fresh beets will provide the sweetness + the usual hearty veggie rich stock, either pork or beef based will take care of the rest. Think of barszcz as a sweet & sour soup. Vinegar is never used for acidity control in traditionally cooked barszcz.

There is a lot of interest nowadays in fermented vegetables... because we've learnt so much about their positive influence on our intestinal microbiome.

Hi Mark, You are correct! Traditional recipes do use fermented beet juice to lend flavor to the soup. It definitely is a great way to bring more fermented foods into your diet as well! More modern recipes often substitute vinegar to make a quicker soup that is comparable in flavor without the fermenting step. But if it is something you are inclined to do, go for it!