Beef Stroganoff is so much more than the 50s and 60s made it out to be. Our easy and authentic Russian Beef Stroganoff recipe combines tender beef and flavorful mushrooms in a creamy sauce for an elegant, yet quick dish. 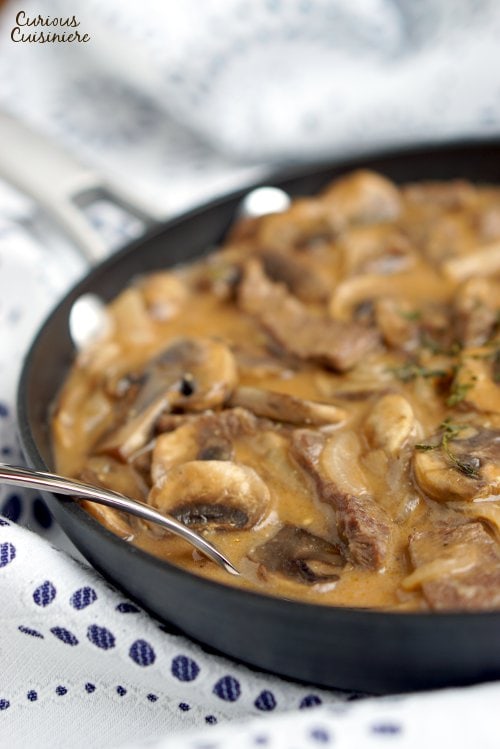 What is Russian beef stroganoff?

Stroganoff (or Stroganov) is a simple and comforting Russian dish consisting of sauteed pieces of beef served in a sour cream sauce.

It dates back to the mid 19th century, and is named for a member of the Stroganov family, who were a group of highly successful Russian merchants and landowners: the richest businessmen in Tsarist Russia.

The first known recipe shows up in the mid 1800s in a Russian cookbook.

After the fall of Tsarist Russia, the dish found popularity in China. Then, during WWII, Russian and Chinese immigrants as well as US servicemen brought the dish to the US.

Popularity of beef stroganoff in the US

In the 50s and 60s, Stroganoff saw quite a bit of popularity in the US, but overtime its image was marred by canned cream of mushroom soup and poor cuts of meat that were slopped over noodles or rice and served in school cafeterias.

It saw so much popularity, it really became an iconic dish. Unfortunately, it was this cafeteria version that everyone in the States came to associate with the name.

If you’ve been scared off by bad cafeteria versions of beef stroganoff, now is the time to give it another chance. 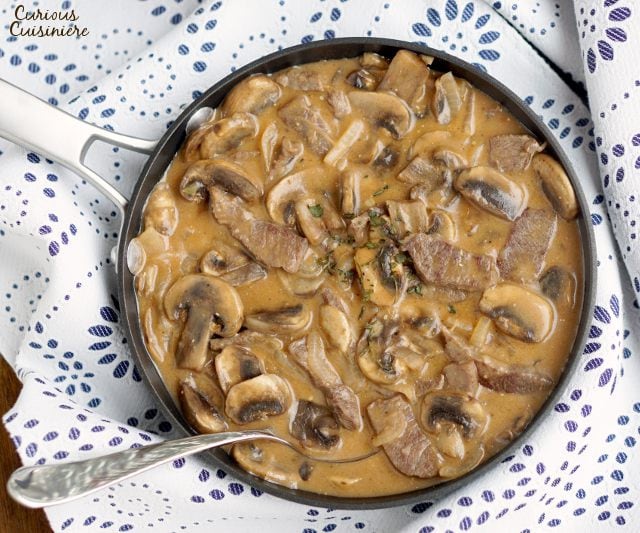 What cut of beef do you use in stroganoff?

The best beef to use in beef stroganoff is a cut that works well with quick cooking. That means you need something that is fairly tender in its own right.

We like to use a sirloin steak, but flank steak is another good option.

The important thing is to cut the steak into thin slices, or chunks, by cutting across the grain. This shortens the fibers of the meat, making it more tender with less cooking.

How do you make authentic beef stroganoff?

The first time we made homemade stroganoff, as we sat down to dinner, we were a bit in disbelief at what was sitting in front of us.

An elegant version of beef stroganoff?

This dish is hearty and full of flavor. With chunks of beef and ample, tender mushrooms.

And, it’s quite easy to make!

We saute our mushrooms first and then remove them from the pan. This is an extra step, but it really does wonders to create different elements in the dish, rather than having everything taste the same.

After the mushrooms, it’s time for the onions and beef to be sauteed.

Then, it’s time to make the gravy with beef broth and seasonings.

Sour cream gets stirred in at the end to thicken the sauce and make it extra creamy!

In less than 30 minutes, you have an incredibly comforting dish that can be served with a number of accompaniments. 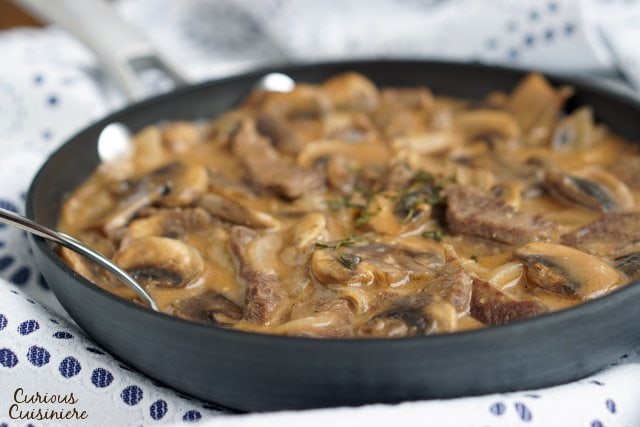 What is traditional beef stroganoff served with?

In Russia, you will most often find traditional beef stroganoff served over fried shoestring potatoes (French fries). It can also be found served over mashed potatoes or rice.

Here in the States, pasta is the most common accompaniment to beef stroganoff, particularly twisted egg noodles.

Whichever way you go, having something to soak up the delicious gravy is a must!

And, while not culturally appropriate, this dish pairs perfectly with a Bordeaux-style wine.

This recipe from 2015 was updated in April 2017. We made the stroganoff easier and more authentic. Enjoy! 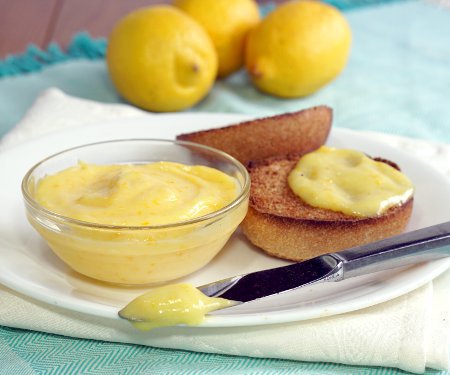 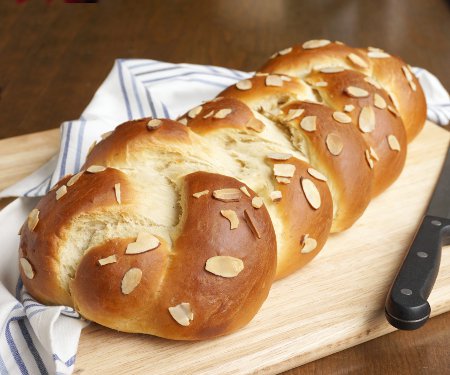 Wow, in this lock down I am doing dishes from around the world and we've eaten everything from Korean to Creole! I originate from South Africa and am widely travelled and now live in London, UK. I always thought Beef Stroganoff was a german dish as most south african dishes are of german influence so boy was I surprised to find it was Russian in origin. I know SA is a melting pot of cultures but way back then nit was German and Dutch influence as well as those on the indian spice trail from India to the USA. I wonder how on earth Beef Stroganoff because so popular in SA, i's virtually the go to dish when catering a party, wedding, etc. That, and curry and rice of course! I solute you for your research and commend the dish, we (SA's) made it with cream as we did not have the luxury of sour cream i those days but it really makes the difference and I LOVE it!

Hi Fiona. Thanks so much for sharing! You do find a lot of similarities and crossovers in German, Russian, and Polish cuisine, so that could be the reason. This is really interesting though! I never realized stroganoff was so big in SA.

My mother d in law came from Latvia but always called herself Russian. She made these tasty little rolls called something like :Speckenkugles" or Spekugens ? Anyway they were little rolls filled with little pieces of bacon and onion. Have you heard of them? If so, I would love the recipe

@Audrey Booth, they are called “pīrāgi” which are basically bacon and onion buns

Check these out, Kroppkakor (Swedish Potato Dumplings Stuffed with Bacon and Onion). Sounds like what you are talking about and they sound delicious. Sweden and Latvia are not so far apart!

Hi Audrey. I'm not familiar with these, but we can do some looking! I wonder if they would be similar to these piroshki (https://www.curiouscuisiniere.com/baked-piroshki/), just stuffed with bacon and onions?

Very good flavor. I raised my family with the ground beef, cream of mushroom soup and sour cream quick meal type. My son had an authentic Stroganoff and raved about it. I made this with prime rib eye steak thinly sliced on the bias, and homemade 1 inch wide noodles. As a guy of 61 years who has always had a bad bite even after years of braces I avoid things that require chewing more than a second or so. I found this for me a bit chewy but good. Thank you for making some authentic food that doesn't throw in garlic. I will make this again but figure away to make the meat easier to chew without using ground meat. Maybe heavily chopped with a cleaver. I had never come across your website before, but I have book marked it for the future, Thanks again..

I use round steak and cut pieces about 1/2 inch by 2 inch and then pound it in flour ( as much as it will take up) and then sauté it in olive oil and after sautéing sliced onions and mushrooms I and beef broth or water with a boullion cube for each cup and simmer until beef is as tender as I want. I also need to get the meat so I can chew it easily.

Glad you and your family enjoyed the stroganoff George! You could always try using 'cubed' steak, which is steak that your butcher pre-tenderizes. This meat is generally quite tender and still works well in the stroganoff.

I, too, have looked for a recipe close to the amazing dish I ate in Kemerovo, Russia over 10 years ago at a cute restaurant just down from our hotel. I agree; this is the closest I have ever come to replicating it. As we ate it tonight I shared the story of going back to that restaurant several times just for the stroganoff with my daughter (who we adopted from Russia). I think the more I make it, the better I will be at it! Thank you so much for the recipe and bringing back memories of a special time!

Hi Paige. Thank you so much for sharing your memories with us! We're so glad you and your family enjoyed the stroganoff!

Thank you got sharing this is the closest recipe I recall to my Otec favorite, we ate several times a month very authentic and traditional!!! Dakjuem!

You're welcome! We hope you enjoy it!