This recipe for Ghanaian jollof rice brings you a brightly colored red/orange rice dish, with a wonderful spice and rich, spicy, and saucy meat. Jollof rice is a much-loved festive dish that is often served at weddings, parties, and other large gatherings. It is a brightly colored orange to red rice dish, due to being cooked in a rich and spicy tomato-based sauce. 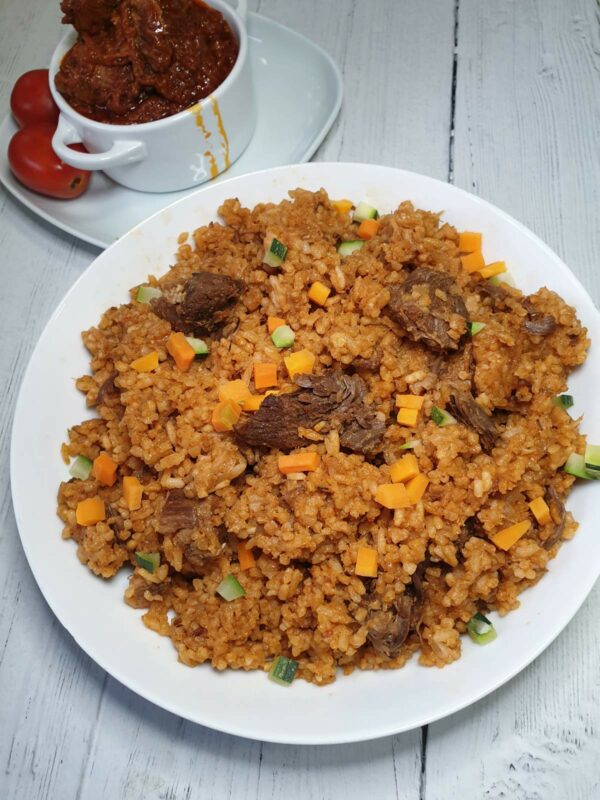 The origins of jollof rice

As much as we have prominent “jollof wars” between Nigerians and Ghanaians, all centered around who makes the best jollof rice, it actually originates somewhere else.

Jollof comes from the Senegambia region of West Africa, particularly Senegal. There the rice dish is called thieboudienne or ceebu jen, and it is a mixture of rice, onions, tomatoes and fish.

How this dish then managed to lend itself to the rest of West Africa as jollof, jellof or jallof still remains a mystery.

Some think that this could be connected to the Senegalese Wolof tribe. Others have also made the connection between jollof rice and jambalaya; however, the direct connection has been heavily contested even though the dishes look similar in appearance.

I have had my own theories as to how it happened that the modern day jollof, a rice dish filled with ingredients that are not indigenous to West Africa, came to be, which you can read about in my Party Jollof recipe. 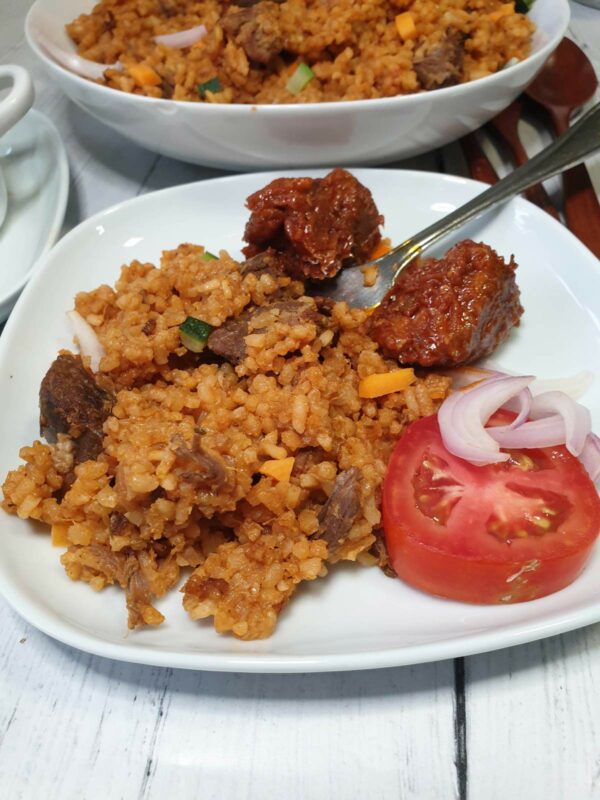 Which rice is best for jollof?

The first component of jollof is the actual rice. As we are focusing on Ghanaian jollof rice here, it pays to note that the choice in rice will vary greatly across the different West African regions.

Ghanaians are partial to long grain rice such as Thai jasmine or Basmati rice.

Nigerians prefer the plump and separated grain effect of par boiled rice such as Uncle Ben’s style rice, easy cook rice, or what we now know as Golden Sella Basmati rice. This is rice that has been parboiled in the husk before milling, resulting in a stiffer grain that does not stick together when cooked.

Ghanaians pride themselves as being purists by staying away from this kind of processed rice, however the benefits of the parboiling process makes the rice easier to digest. 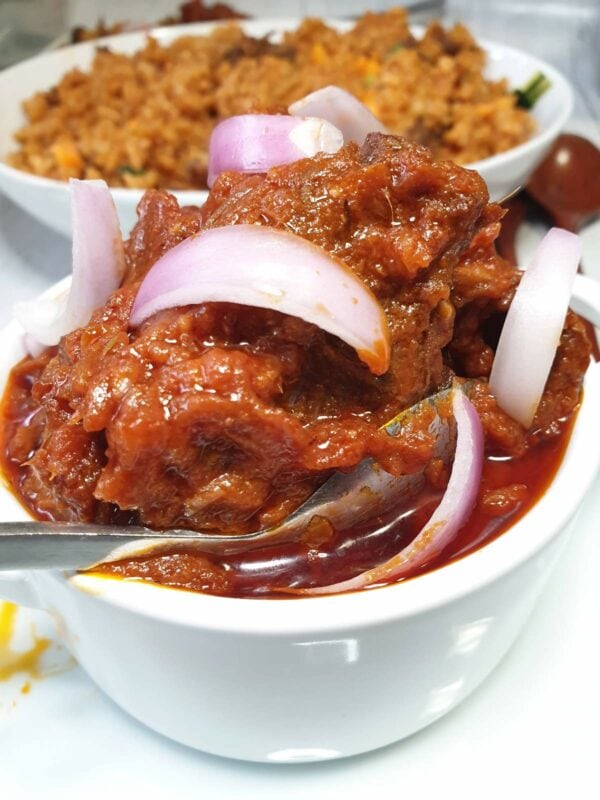 The second major component in jollof is the tomato stew base.

This is usually made by frying onions, adding tomato paste or puree to enrich the sauce, followed by blended tomatoes, garlic, peppers and ginger. Once all ingredients are in the pot, the sauce is then reduced to a thick and rich oily mixture.

We love observing an oil film at the top of a stew or sauce. This signals that it is ready to receive the rice and additional water for steaming.

Does jollof rice have meat in it?

Jollof can come with or without meat. But the third component of today’s Ghanaian jollof rice recipe, and this is particular to many Ghanaians, is the meat that is mixed into the rice.

Jollof rice can also be made with chicken or fish.

Other modern variations have seen people mix corned beef into their rice to make an entirely delicious meal with a modern industrialized twist. 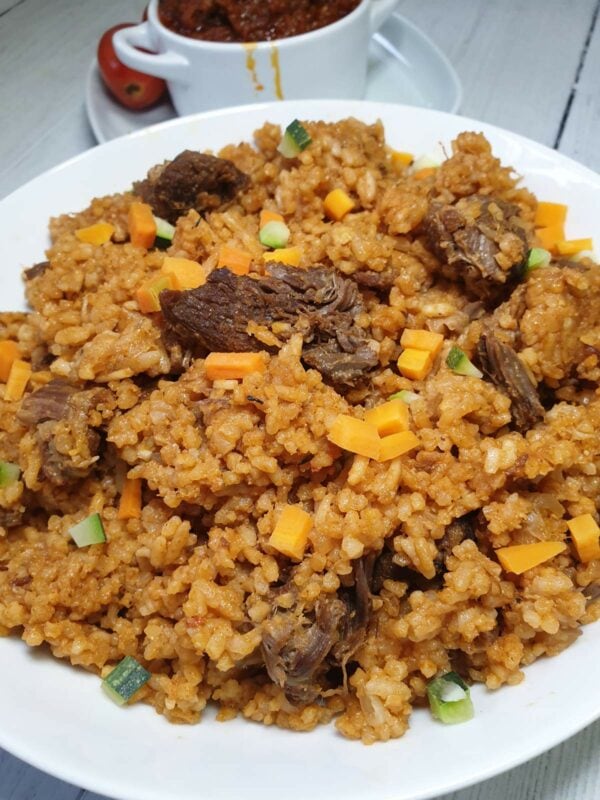 What is used to season jollof rice?

A variety of spices can be used to make this one pot dish. I find that the choice of meat will determine the direction of spices used.

Memories of my mother’s jollof rice are filled with the rich aroma of cloves, which she would always add to her goat or beef jollof rice.

Seasonings such as bouillon cubes, chicken spice, or salt may be added, followed by dried aromatic herbs such as bay leaves, thyme or mixed herbs.

You can now even find “jollof mix” spice blends in some stores depending on your location.

Can I add vegetables to jollof?

The final step in Ghanaian jollof rice is stirring in some mixed vegetables such as carrots, green beans and peas.

This step may have come out of food and nutrition or catering lessons, as the result is a beautifully bright garnish, however it is a very common step in Ghana.

Other vegetables that can be used are cabbage, aubergines (eggplant), and tubers such as cassava or potatoes. However, these are more common in thieboudienne and other Sahel regions of West Africa. 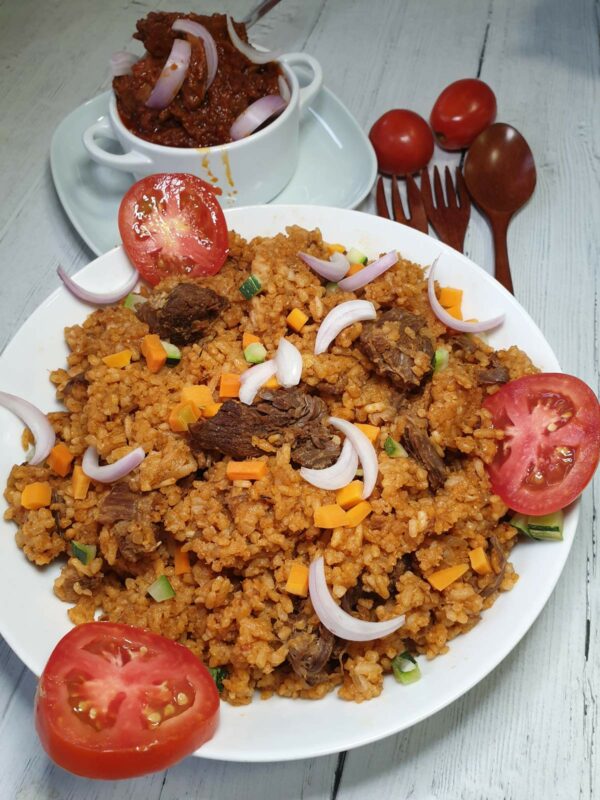 Variations of jollof in West Africa

As previously mentioned, in Senegal, the dish called thieboudienne is the national dish of the country and is considered the origin of jollof rice.

Not far away in neighboring Gambia, benachin is the thieboudienne equivalent.

When I was growing up, I remember my aunt’s benachin. She would make it with dried salted fish, which had a fermented flavour. Her’s was absolutely delicious.

Nigeria’s most popular jollof rice is known as “party jollof” in Lagos state. Party jollof is one of the most searched African food items on Google. It is often cooked in large quantities, over a wood fire and is described as having a smoky flavour, which comes from the charring at the bottom of the huge three-legged vats that caterers use.

Similar Dishes to jollof rice around the world

When cooked without meat, jollof is very much a savoury rice dish, comparable to the Portuguese arroz de tomate.

I previously mentioned jambalaya as a dish that is similar to jollof rice. It is a dish with West African and French roots.

Not far from jambalaya in America’s south, Gullah red rice is almost identical to jollof, with the addition of smoked sausage.

*Scotch bonnet peppers are quite spicy, which will give significant heat to this dish, as is traditional. If you prefer more medium or mild food, adjust the amount of scotch bonnet pepper according to your preferences. While not traditional, a 1/2 teaspoon of paprika could be substituted for each pepper for a (not spicy) version that is more accessible to spice-sensitive palates.

**If bouillon cubes are not available, they can be omitted. If doing so, be sure to use broth instead of water for best flavor and add salt to taste.

***To help clean the pot, boil some water in the empty pot. Then let the hot water stand in the pot for 20 minutes. Scraping the bottom occasionally. This typically works quite well for getting those bits un-stuck.

Freda Muyambo has been a food writer for 10 years, with a significant focus in the under explored area of African cuisines. She is now established as an African Cuisine Expert and resides in Lagos, Nigeria with her husband and 4 children. In 2018 she co-authored “The Science of Spice”, exploring the spices of the African continent. You can find Freda on her site MyBurntOrange.com. 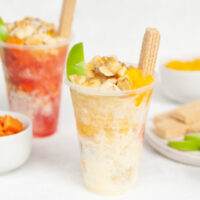 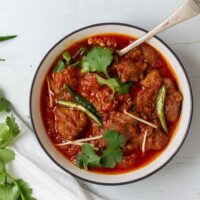