Puerto Rican Pernil brings slow roasted pork to a whole new level, with a robust garlic and oregano flavor and salty, crisp skin. It doesn’t matter how you serve this roast pork recipe, just be sure to make a big batch! 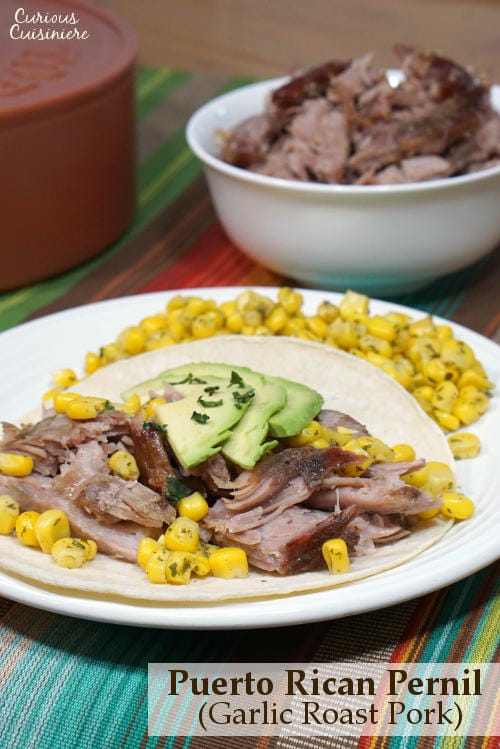 When we have a crowd over for a game night, we love serving build-your own style meals. That way everyone can pick and choose what they like best.

And, the spread is typically easier to put together, meaning that we can enjoy the party too.

Tacos are one of our go-to meals, and we like to mix up the meat we serve, just to keep things interesting.

This garlic and oregano infused pulled pork really packs on the flavor, and it is SO easy to prepare. You’ll wonder why you didn’t discover it sooner!

Pernil is traditionally the staple dish at a Puerto Rican Christmas Eve dinner.

But, we think it’s so tasty, it shouldn’t be reserved for Christmas Eve alone.

The word pernil comes from the Spanish word pierna meaning leg. In some regions, it is also the word for ham, which makes sense, since originally, the dish was prepared using fresh ham (not cured).

Nowadays, pork shoulder is easier to find than an un-cured ham hock, which is why the pork shoulder has become the widely accepted cut to use in the dish. 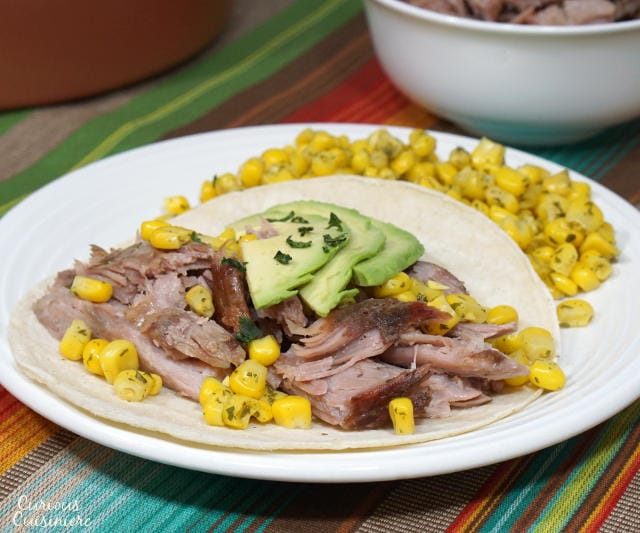 The crown and glory of this roast pork is the layer of fat on the pork shoulder.

Leave that baby on the meat to roast! It is going to infuse the meat with TONS of juicy flavor.

But, since that layer of fat creates a barrier between our seasonings and the meat, we have to do a little prep work to get the flavor we want along with the juicy flavor from the fat.

So, first we cut back the fat, along the top of the meat, ever so carefully using a small paring knife, until it becomes a flap that is just hanging on by one edge.

Then, we cut deep incisions (roughly 2 inches) into the meat itself. 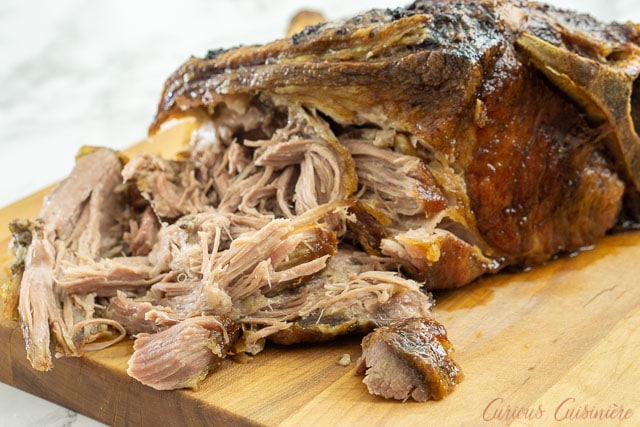 These incisions then get stuffed with a garlic and oregano seasoning mixture, so all that flavorful garlic goodness gets right into the meat, right away.

Finally, we cover the meat back up with that flap of skin, sealing our seasonings on the INSIDE when the fat starts to do its moisturizing thing.

Then, we rub the top of the fat with salt. The salt will draw moisture out of the fat cap, turning it into one, lovely mass of super crispy goodness.

That crispy skin, called chicharrón, is considered the most coveted part of the entire dish.

(Those of you reading this from the Southern US, we know you’re getting excited. PORK RIND! But, trust us. This is EVEN BETTER!) 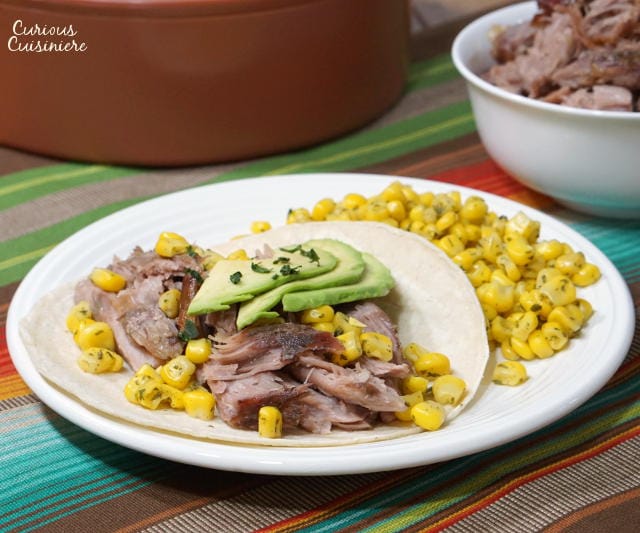 Pernil is traditionally served with rice and beans. And while that makes a tasty meal, we loved serving it taco-style with sweet corn and creamy avocado.

Just make sure you get some of that crispy chicharrón goodness in there too!

*When determining how much pork you need to feed your crew, keep in mind that the meat will shrink by about half. You can feed 3-4 people on 1 lb of cooked meat. So, a 2 lb (uncooked) roast would yield 1 lb cooked meat and serve 3-4 people.

This is usually served with arroz Con gondules. I should know. I ate this my whole life. With adobo Goya.

Thanks for your comment Juan. As I'm sure you read in our article, we do mention that it is traditionally served with rice and beans. We'll have to give your arroz con gondules a try some time!

Good recipe, but just to clear things up....it is NOT a layer of fat!!...it is skin., and skin is full of collagen, not fat. Very healthy.

Thanks for the clarification Salvatore!

You always have such interesting ethnic recipes and I love the look of this pork!

We tried making this dish last month but couldn't find skin-on pork roast, so I ended up taking inspiration from the pernil and simply threw it in the slow cooker. Definitely wish we could have because crispy skin sounds too good to pass up. I like that you served yours with corn! I'll have to do that next time. (Along with rice and beans because, yum.)

Thanks Lauren! The pork shoulder we used for this dish just had a nice layer of fat on one side. It can be really hard to find a pork roast that still actually has skin, unless you're friends with your butcher :) . Using a roast with a nice layer of fat still works really well to get some of those nice crispy bits, particularly if you salt the fat too to draw out the moisture.