Savory and sweet Arroz con Coco is a wonderfully flavorful Colombian Coconut Rice side dish that you will soon find yourself addicted to! 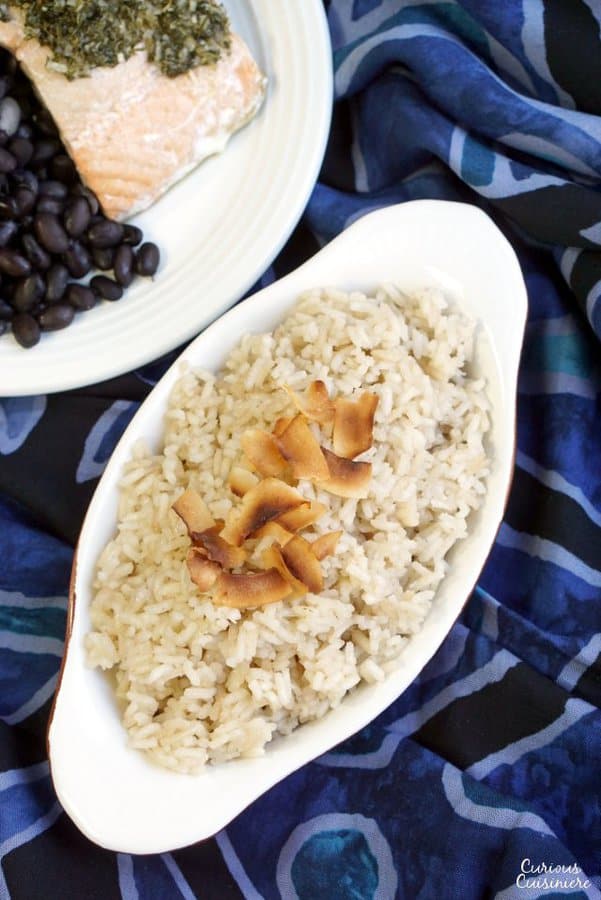 Variations of coconut rice can be found in many tropical regions around the world, including India, Thailand, Indonesia, Malaysia, Latin America, and more.

Many versions of coconut rice are prepared by simply cooking white rice in coconut milk, creating rice with a unique, slightly sweet flavor. Sometimes the rice is seasoned with sweet accompaniments (like ginger or sugar) and other times it is made more savory (with salt and onions). 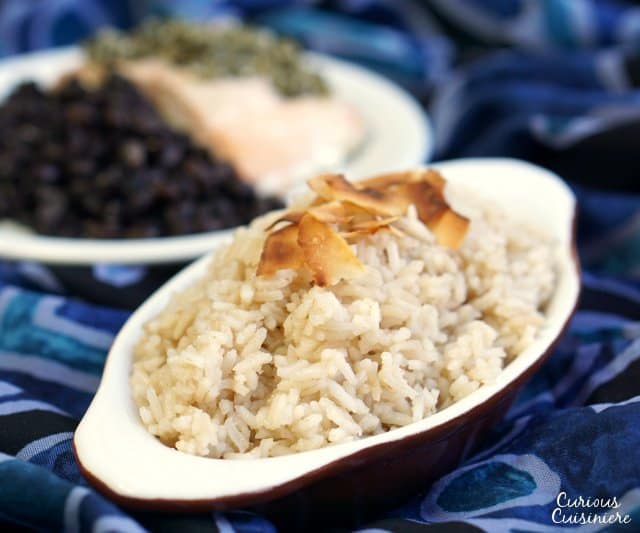 How to Make Coconut Rice

What makes Colombian coconut rice different from “white” coconut rice is that the rice is not cooked in the coconut milk. 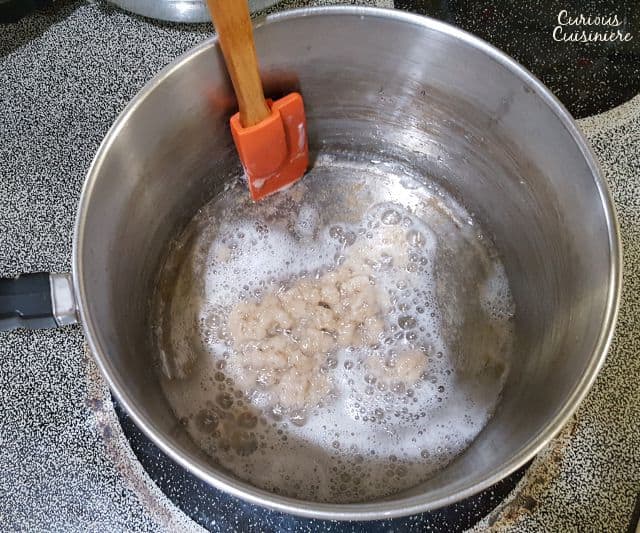 This mixture is what you add your dry rice to.

The rice gets coated with these toasted coconut solids and flavorful coconut oil, which infuses it with a slightly sweet and toasty flavor as it cooks.

As you’re making the rice, you may wonder if all the work is worth it. But, the flavor of the end result is OUT OF THIS WORLD!

Our Experience With Arroz con Coco

Honestly, as we were making this dish, we DID wonder if all the effort would be worth it.

Reducing the coconut milk took us about an hour. AND THEN we had to cook the rice.

It was definitely a labor of love.

By the time we sat down to eat we were both ravenous and ready to be done with this silly coconut rice.

And then we took a bite.

The look on both of our faces as we tasted a combination of sweet and savory, toasted and subtle flavors that we had never experienced before must have said it all.

The effort was SO worth it.

And we’ll be making this rice again and again.

(We’ll just plan better next time for the time it takes to reduce the coconut milk.) 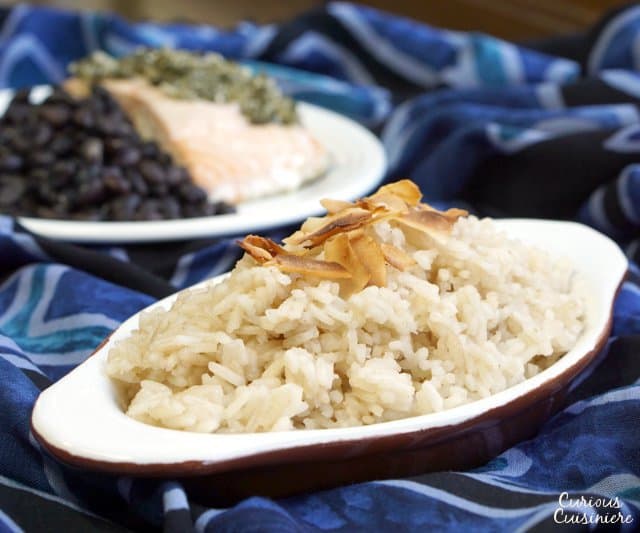 One important thing to note when making arroz con coco is which coconut milk you choose.

You need to find full fat coconut milk without any stabilizers (crystalline cellulose or xanthan gum), if possible. Since our goal is to separate the coconut milk into solids and fat, we don’t want these stabilizers keeping our coconut milk from separating.

That being said, we couldn’t find coconut milk without any trace of a stabilizer, so ours did contain guar gum, but it still separated fine.

If your coconut milk does have stabilizers though, don’t worry. All you have to do is add 2 Tbsp of oil (coconut or canola) to the pan once the coconut milk has reduced to its solids. This will mimic the same toasting effect that the separated coconut milk does naturally.

We can’t end without one final note of warning.

BE CAREFULLY ADDING YOUR WATER!

That means that when you add the water to your rice mixture it is going to steam and sputter like CRAZY!

So, add the water carefully and then stand back!

And get ready to enjoy something incredibly delicious! 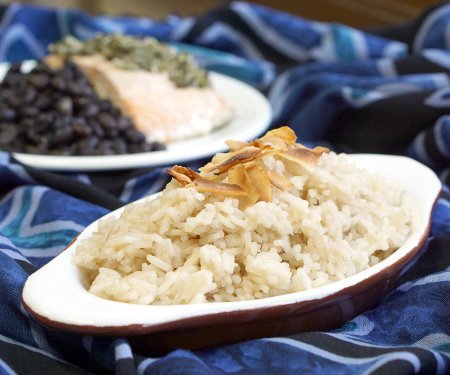 *Look for coconut milk that is free from stabilizers like crystalline cellulose or xanthan gum. If not, not worries, you'll just need to add the coconut oil as directed in the recipe. 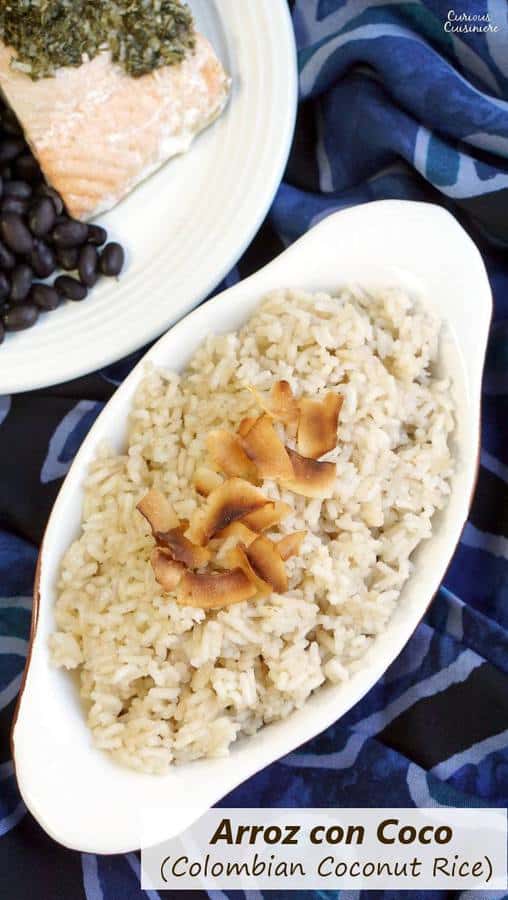 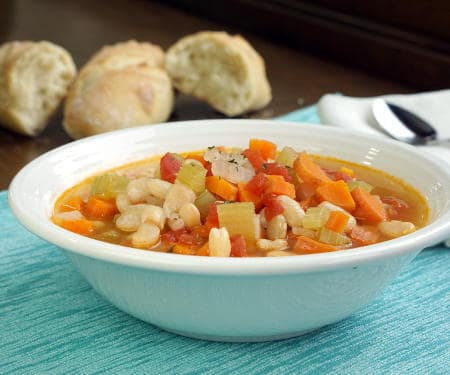 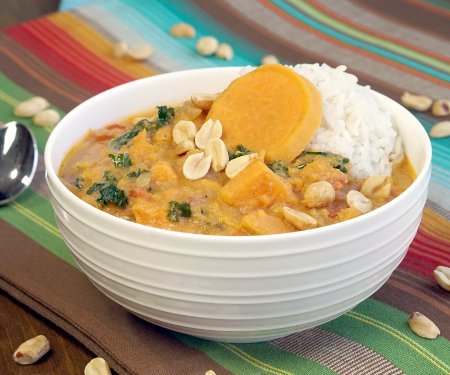 I put the can of coconut milk in the refrigerator for at least 24 hours so the milk turn into hard some times soft paste it separates itself from the water. I spoon out the paste and fry it With coconut oil and after is fry I use the coconut water. This way is less time consuming it takes between 10 to 15 minutes

I haven't been able to find coconut lately, so when i saw this recipe, I was very skeptical at first. But........ O M G !!! this is jusssstttt like my hometown in Cartagena, Colombia. Thanks so so much for the recipe, it is extremely well detailed and perfectly explained. I can't even explain how much I love it!

So glad you enjoyed our recipe Catherine!

This coconut rice experiment was inspired by my COVID re-reading of, " Love in the Time of Cholera" by Gabriel Garci'a Ma'rquez. He mentions it a number of time in the novel.n I had to find our why he lovingly writes about coconut rice. It was a delight, I'm so thankful you wrote about it and published this recipe. I made it with salmon from the grill. I don't know how to describe its effect on us, but it lighten our dinner with delight. Thank you, Val

How fun! Thank you for sharing Val. We’ll have to pick up a copy of the book and give it a read!

This recipe was very well explained and very easy to follow without a video. The only thing I added to this recipe was a handful of golden raisins, and boy was it tasty. It is definitely a crowd pleaser!

Glad you all enjoyed the rice recipe Crystal!

For Thanksgiving dinner, is a family tradition to serve Colombian style coconut rice with the Turkey. Is a great combination. This year I wanted to make it myself, my aunt used to make it, the traditional way with the coconut. That's a lit of work. Your recipe seems us an easier way of making it. Hope it comes out good.

Hope your family enjoys it Mily!