A perfect balance of sweet, salty, and sour, this recipe for flavorful stir fried Pad Thai noodles makes for a quick and unique meal. 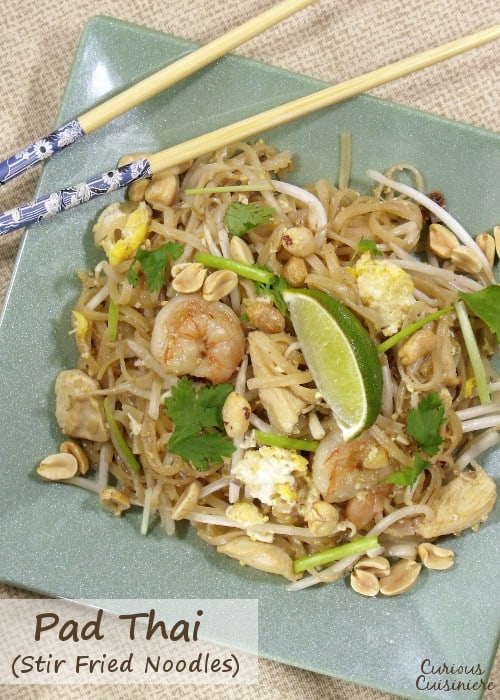 (DISCLOSURE: This post contains Amazon affiliate links. These links are provided to help you find some of the more specialty products we mention in the recipe. If you make any purchase after clicking through one of our links, we receive a small commission from Amazon, at no extra cost to you. Thank you for supporting Curious Cuisiniere!)

The interesting thing about Pad Thai is that, for as often as we see it in Thai restaurants and think of it as the essential Thai food, it really isn’t a typical Thai dish.

It is thought that the dish originated from Chinese settlers, since noodles and stir fries play a large role in Chinese cuisine.

Even the traditional name of the dish, kway teow pad Thai, speaks to the dish’s Chinese origins.

Why would you classify a dish as Thai-style in its own country of origin?

The History of Pad Thai

Pad Thai is a fairly new dish, which exploded in popularity in the 1930’s and 40’s due to the Thai government’s push to improve the national diet and westernize the nation by instilling a national image.

Apparently, a noodle dish was just the thing to do both.

Rice noodles were inexpensive and filling, and by adding vegetables, bean sprouts and a protein, Pad Thai became a cheap and nutritious meal.

As far as creating a westernized image, the success of that goal can be seen by the number of Pad Thai restaurants you will find all over the globe. In fact, many believe that a Thai restaurant’s Pad Thai is the ultimate test of their quality.

With its complex flavors and perfect mix of textures, a bowl of pad Thai might seem like an intimidating dish to recreate at home. But, it is really quite a quick and easy dish to make.

If you’ve ever made Fried Rice, then you will have no problem throwing together a fantastic Pad Thai.

In fact, it could be said that the technique for making pad Thai is like a cross between making chow mein and fried rice.

While similar in technique, the flavors of Pad Thai are very different from Chinese noodle dishes, since Thai cuisine leans more to the sweet and spicy flavors of fish sauce and red chilies, often in combination with peanuts.

What really makes Pad Thai unique is the way it brings together some ingredients that are unfamiliar in many western kitchens:

Lets break these ingredients down a bit.

What Are Rice Noodles?

Rice noodles (banh pho) are simply noodles made of rice flour rather than wheat flour. They are translucent and have a tender, chewy texture.

Unlike traditional pasta, they only need to be soaked in warm water to re-hydrate.

What Is Fish Sauce?

Fish sauce (nam pla) has a saltiness that is similar to soy sauce, with an added depth of flavor that is uniquely its own.

It is made from fermented fish (typically anchovies) and salt. (Now, before you go running at the mention of anchovies, let me remind you that the Worcestershire sauce that you probably have taking up a corner of your pantry also includes anchovy on the list of ingredients. Just sayin’.)

Due to the fish, the sauce does have a slightly off-putting smell. But, once added to a dish or dipping sauce, it brings an incredible punch of flavor.

We have been able to find fish sauce fairly easily in the Asian section of our local grocery stores, right next to the rice noodles.

What Is Tamarind Paste?

Tamarind paste is a paste made from the fruit of the Tamarind tree.

This paste has a fruity-sour flavor with a hint of sweetness. There really is nothing like it.

Unfortunately, tamarind paste can be a bit tricky to find in some areas.

If you just so happen to live in one of those tamarind-void places. Don’t fret! 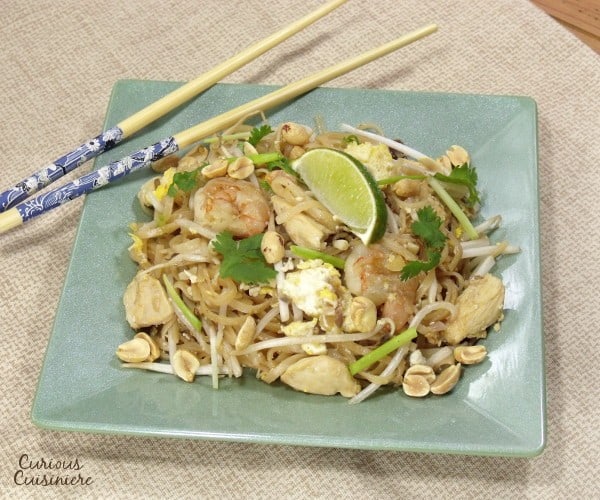 Even though you will find some unique ingredients in this dish, there is no reason to be scared.

In fact, the delicious balance of flavors and textures in a good Pad Thai should have you running to the kitchen to create your own! 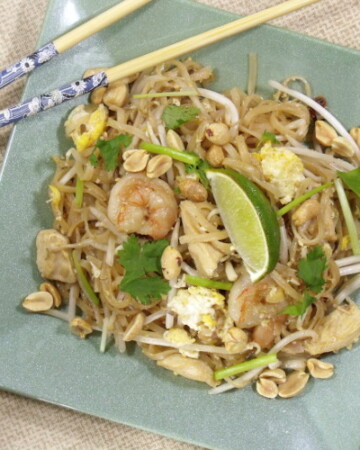 More Asian recipes from from some of our favorite bloggers:

On the Lighter Side

Thanks so much for this recipe!! For almost a year now, I've been trying a few recipes in an attempt to learn how to make Pad Thai for my family. The first time I made it, I got CHOPPED (my nine year old is brutal). I must tell you that it hurts to get chopped in your own kitchen!! The past few attempts have been just decent, but getting better. I have a good feeling about this recipe, though. If you guys get me there, I'll be back with copious amounts of gratitude.

I'd like to ask a question though, I thought that Thai peppers were an essential ingredient. Is this not the case? Please advise.

Hi Jim. We hope this recipe is a hit! We substitute crushed red pepper flakes to make this dish more easily accessible for people who don't have access to a store with Thai chilies. If you have some Thai chilies, go ahead a substitute them for the crushed red pepper, according to your family's heat preferences! Let us know how it turns out for you!

I remember getting a great pad Thai at a street market near where I used to work in London now and then - so delicious. Keep meaning to make it myself more, and your recipe looks tasty!

If you give it a try, be sure to let us know what you think!

Looks so good! I like mine with those little sliced hot red peppers though. I love spicy!

I'm with you there! Bring on the red peppers!

Wendy, A Day in the Life on the Farm

Thanks Wendy! It is delicious :)

I totally enjoy a good Pad Thai. Interesting on the history of it though. I really did think it was an old Thai dish.

We did too Renee! The history is so interesting!